Today's Hunts Post ( 31 October, page 21) says that building of the new town at Northstowe begins in 2013. 'Northstowe' will be on the old airfield and barracks adjacent to the guided busway between Oakington and Longstanton.

Concerns are expressed about the transport needs of creating the new town, and there is a 'call for more transport facilities to complement the guided busway'. But no specifics are mentioned except that improvements will be made to the A14/B1050 junction at Bar Hill. Those of us who are local to the Cambridge/Bar Hill/St Ives area know what a nightmare the A14 is, and the prosepect of extra traffic from Northstowe adding to the A14's congestion problems is not a pleasing one.

It seems that the next 12 months will be spent in drawing up plans for the development.

The Cambridge News gives more details. Planning permission has been granted for the 1500 houses. The golf course will be built over. There will be a school, shops, sports facility, and community centre. Good news for cyclists is that there will be a cycle way to Bar Hill.

Busway facilities for passengers who are blind

The bus companies which run services on the busway have been criticised for not providing audible announcements of stops on the busway for the benefit of passengers who are blind. See article in Cambridge News.

A letter in repsonse to this was published in the Cambridge News ( 6 November, page 12). It is from a swavesey resident whose sight is good, but still has difficulty signs at bus stops, especially at night or when the windows are misted up. His friend from London was astonished that our expensive transport system did not have illuminated signs to indicate the next stop. Regarding audible announcement of stops, the writer says that any small increase in noise due to such announcements would be 'vastly outweighed by their usefulness'.

Julian Huppert, MP for Cambridge, has given his support to the campign to have announcements of bus stops made compulsory. See Cambridge News, 7 November, page 5.
Posted by Andrew Bethune at 14:58 No comments:

Cambridgeshire County Council has been allowed an extension until 31 December to respond to BAM Nuttall's defence and counter claim in the on-going dispute about the guided busway. Read this report in the Cambridge News.
Posted by Andrew Bethune at 14:51 No comments:

One of the contributors to this blog has commented recently on research being carried out into the engineering characteristics of the concrete beams, specifically mid beam cracking. This has been evident on the busway from very early on. This picture was taken in 9 October 2011 on the section between St Ives and Fen Drayton, where the track is supported on deep piles. 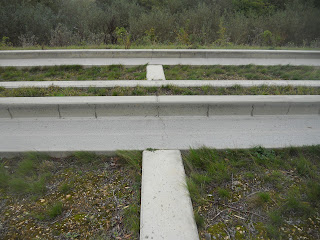 In the last week or two, timekeeping of the Stagecoach buses on the busway at peak times has got worse and worse. It's not been helped by the roadworks in Hills Road, Cambridge.

Today I boarded an A at Parkside at about 17.05. This was heading for Marley Road, and although it was running more or less on the schedule of the Chatteris service, it must have been the previous Marley Road service. So it was running a full 30 minutes late.

While waiting for this bus to arrive, I noticed that three As were show as getting close - in 11, 12 and 13 minutes respectively. By the time I whipped my camera out, the display had changed to buses due in 8, 11 and 12 minutes. 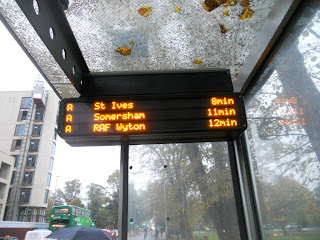 Anyone else with tales of late running buses this week?
Posted by Andrew Bethune at 20:38 1 comment:

In the last few days, Stagecoach have introduced some very smart display/advertising panels which run along inside the buses, above the windows. Panels advertise St Ives ( photo of the Town Bridge and Chapel),  and benefits of buying a Smartcard.

Best is a route map somewhat in the style of London Underground trains. 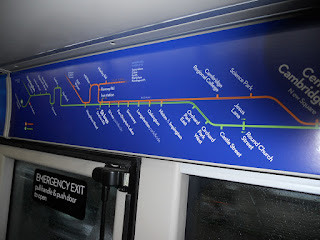 The only problem is that there are three errors.  Look closely at the two pairs of bus stops - Round Church Street/Jesus Lane and St Ives Bus Station/Station Road and you'll see that the directional arrows go the wrong way.

Also the branch going to Somersham seems to imply that the guided bus to Needingworth goes via Ramsey Road and Marley Road, when, in fact, that service goes direct via Needingworth Road.
Posted by Andrew Bethune at 20:30 No comments:

The Cambridgeshire guided busway has been recognised in the National Transport Awards for the most innovative transport project. Its use of technological  and environmental innovations were commended.

There is also a report in this week's Hunts Post (17 October, page 2)

A full list of the awards can be found on the Transport Times website.
Posted by Andrew Bethune at 10:11 No comments:

Busway items in the Cambridge News

An ambulance crew was unable to reach a cyclist who had collapsed on the busway cycle track near Fen Drayton, because they did not have the security code to remove the bollards. The County Council had sent out the codes to the emergency services but somehow this particular ambulance crew was unaware of the code. First aid was administered by members of Over Running Club who happened to be nearby.    http://www.cambridge-news.co.uk/News/Ambulance-blocked-by-guided-busway-bollards-04102012.htm

Rain and the guided bus have apparently reduced the incidence of anti-socail behaviour in Histon. But unhelpfully the short article does not explain why.

http://www.cambridge-news.co.uk/Cambridge/Rain-and-guided-bus-reduce-anti-social-behaviour-09102012.htm
Posted by Andrew Bethune at 14:31 No comments:

A new solution to overcrowding on the morning commuter buses was revealed today.

I boarded the 0737 A at Station Road, St Ives. The bus already had people standing when it arrived. More boarded at the Park & Ride. The driver announced that  he was allowed to have 30 people standing. He then asked the people sitting in the tip-up seats to stand so that the full 30 standing passengers could be squeezed into that space.
Posted by Andrew Bethune at 09:41 12 comments:

Once again the centre of St Ives is subject to traffic chaos due to the lack of joined up thinking as regards the Monday Market and the Michaelmas Fair.

The main market square is mostly unavailable to the regular market, so the  market stalls are in the bus station. 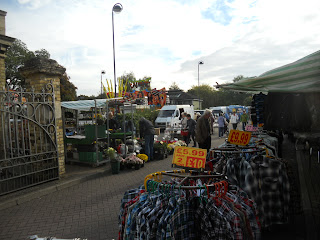 This means that buses which terminate or start from St Ives Bus Station are displaced to the bus stop in The Quadrant, where there is no space of buses to lay over between trips. 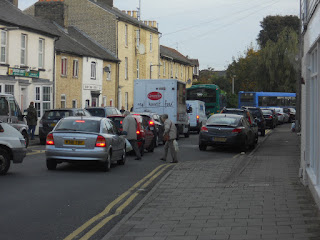 As far as I can see there is no information about these diversions on the Stagecoach  or Whippet websites, nor on the Busway website.

One reason the busway got funding was because it was hoped it would attract people out of their cars, and specifically people would switch from driving on the A14 to using the bus.

Cambridgeshire County Council has recently published a report which claims that the busway has taken 600,000 car journeys off the A14. See the Cambridge News website for more details of what the report says.

There is a link to the busway survey report here.
Posted by Andrew Bethune at 21:40 No comments:

Today's Hunts Post (3 Oct, page 6) has a letter from a Broughton resident complaining about the overcrowded guided buses ever since the college term started.

Andy Campbell of Stagecoach East replies to say that it is often the case that students want to travel at the same time for the first few weeks of the new term in September. This usually subsides after a few weeks when they obtain their timetables with varied starts.' He goes on to add that Stagecoach have increased the bus service for 6 an hour to 8 an hour, that they have added 3 extra journeys on college days to meet the demand, and that they are monitoring the situation.

Not sure how the monitoring process happens - but I'd like to suggest that an extra service A at about 07.35 from St Ives might help. I guess a double decker is out of the question as it couldn't get under the Hills Road bridge near Cambridge railway station.

Yesterday (Sunday) I travelled into Cambridge on the B route. My return journey was on the 1220 departure from Drummer Street. This bus was late arriving at Cambridge, and so was also late departing. It had to make a diversion via Victoria Avenue and Chesterton Lane because Jesus Lane was nose-to-tail with cars, I guess trying to get into the Park Street Car Park. I've experienced delays to buses due to Park Street traffic before, but  his was the worst I've seen. As a result of the diversion, the bus did not call at Jesus Lane/Cloister Court - which I was quite pleased about, but any passengers waiting at Jesus Lane would not be so happy. It's an example of how busway services can be adversely affected by traffic conditions on the normal roads.
Posted by Andrew Bethune at 10:24 2 comments: