The two ticket machines at what must be the busiest stop on the busway, St Ives Park & Ride, are currently completely out of action. For a few days they were papered over, and an apology message suggested it was outside their control. But now they have been completely sheeted over with black plastic. 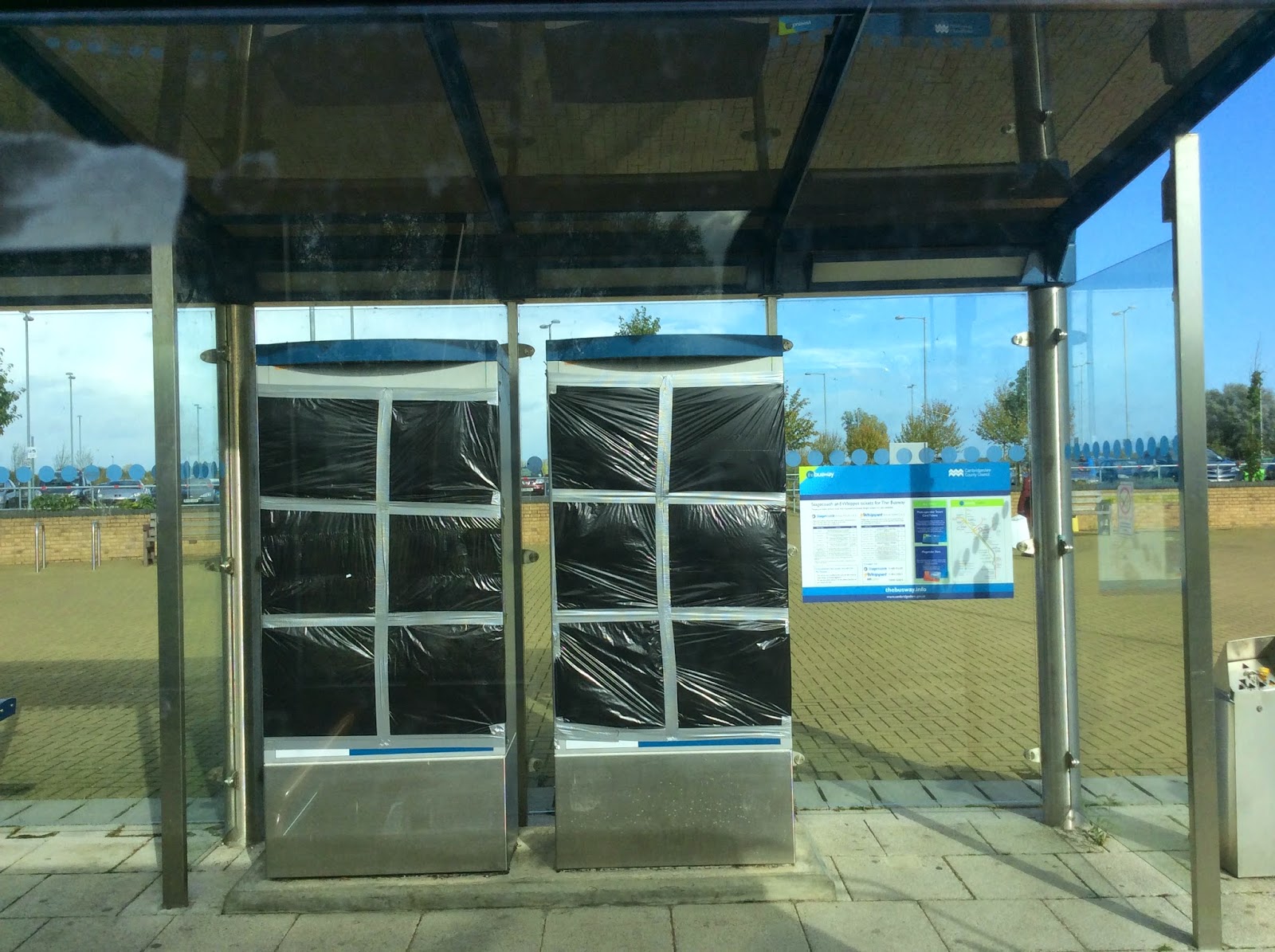 Some ticket machine along the route have been out of action for months, and the rest no longer take cash payments.

All this means that more people are having to pay the driver for their tickets, and inevitably this will slow down the buses.

When is the County Council going to fix the machines?
Posted by Andrew Bethune at 20:28 1 comment:

Back in the summer, I reported on proposals to light the Busway's southern section. There's more!

At its meeting on 8 July, the County Council's Economy and Environment Committee deferred any final decision until its 16 September meeting. Then at that meeting discussion was again deferred, this time until the 21 October (it was felt it fitted well with other issues due to be discussed at the October).


So, here it is on the agenda for the committee's 21 October meeting. The associated paperwork contains some interesting stuff - for example, statistics of cyclists and pedestrians using what it describes as the "maintenance track" alongside the Busway. It's proposed that funding comes from developer contributions in the Cambridge Area Transport Corridor Funds.

The report presented to next week's committee explains that the original  - seriously flawed - "preliminary costing" was
"was carried out at a very early stage before full investigation into the possible lighting solutions for the Busway had been carried out".

The Cambridge News has obtained Busway passenger numbers for the year to 6 August 2014. They show usage at 3,457,354 - slightly below the County Council's target for Year 3.

There's no background, beyond what's in the Cambridge News piece, as these figures don't yet appear in any report to a County Council committee. And it's hard to know exactly what they cover. One of the opponents of the Busway is quoted as saying that they include all journeys made by "guided" vehicles (so including off-Busway routes), but no evidence is offered to support that view. (The same person seems to imply that there's something wrong in including "concessionary pass" travellers in the figures, simply because they don't pay directly for their journeys.)
Posted by Hugh Taylor at 09:14 3 comments:

A passenger was taken to Addenbrookes with back, head and leg pains, and a number of other passengers suffered more minor injuries as a result of an incident on the Busway yesterday afternoon (2 Oct). The driver was forced to execute an emergency stop to avoid colliding with a cyclist carrying his bike across the tracks near Histon. The Cambridge News has the full story, including an eye-witness report.
Posted by Hugh Taylor at 15:18 1 comment:

The headline is the simplified version - in fact, the County Council's General Purposes Committee, due to meet on Tuesday, October 7, will be debating expert advice on tackling busway defects. This includes technical advice in respect of both the concrete guideway and the foundations and drainage, as well as legal advice from a QC.

According to the County Council (in its press release), "the technical advice suggests that Bam Nuttall is responsible for defects on the Busway. The report outlines that some parts of the Busway were either not built to the agreed design or don’t comply to national standards specified in the contract.

Defects include
• Shims and neoprene pads were put in without being fixed so they now slip and cause movement of the beams, effecting ride quality.
• Foundations were not deep enough as outlined in national guidelines on certain sections so they could move in the clay conditions.
• Inadequate drainage at two locations
• Joints between the guideway beams that were too narrow to allow for thermal expansion of the beams.
• Some bearings were identified as being out of position.
• Beams not being restrained enough by brackets so they move.

...the legal advice is that this is a breach of contract and that the Council has a good case and should pursue the contractor for the money to pay for the necessary repairs."

Officers are recommending that councillors should "resolve to carry out works to rectify all of the superstructure, foundation and drainage defects in accordance with the assessment of the Project Manager and the advice of the Council’s expert technical advisers, subject to securing funds from Bam Nuttall in accordance with the defect provisions in the construction contract or alternative legal argument; [and] instruct Officers to initiate negotiations and any necessary legal proceedings to recover the assessed cost of defect correction in accordance with the contract, consequential losses arising from those defects, and any costs incurred to date and incurred in future in investigating and taking advice on the defects."


Full documentation (minus Appendix D - which is confidential to members, and any of discussion of which will take place with press and public excluded) is available here. Some of the sums involved are quite eye-watering (see Appendix B, for example).
Posted by Hugh Taylor at 11:51 3 comments:

Stagecoach recently announced that it has ordered six new Scania/ADL Enviro 400 buses to go into service on the Busway. These new vehicles have Euro 5 engines, are fully accessible and have free Wi-Fi, power sockets and air chill. They're expected to go into service by the end of the year.

Those who delight in media-speak might feel a need to read the Stagecoach press release.
Posted by Hugh Taylor at 11:25 No comments: