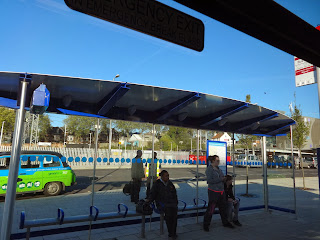 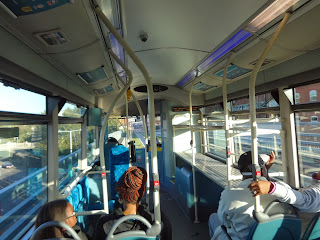 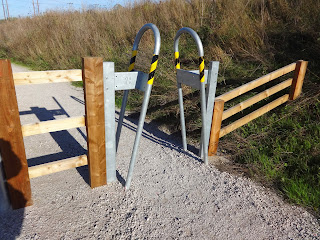 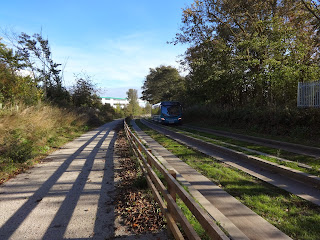 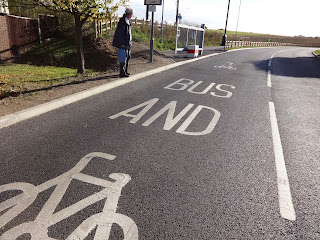 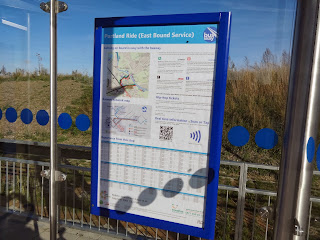 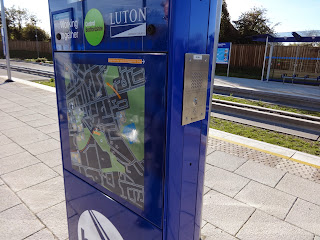 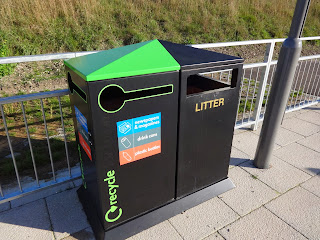 A bit complicated for visitors to Luton, especially with buses looping around Dunstable town centre.
Posted by Andrew Bethune at 15:16 No comments:

A14 upgrade and the Busway

Today's County Council Cabinet meeting also considered the Council's response to the Highways Agency consultation on the A14 upgrade. Buried in the paperwork for this agenda item was the following paragraph:

There is a need to complete an unsigned 2010 agreement with the HA to protect the integrity of Guided Busway services during modifications to the A14 over bridge on the Cambridge Northern Bypass and it is proposed that this be flagged up in the consultation response.

My understanding of this is that there is no statutory protection for the Busway when it passes under a road bridge, in the way that exists for rail lines. So the County Council has to negotiate with the Highways Agency to ensure that work - as and when it's carried out - doesn't prevent Busway services from running. If anyone has a clearer, more informed understanding of the situation, please add a comment.
Posted by Hugh Taylor at 20:44 No comments:

Terms of reference for independent review of Busway approved

Cambridgeshire County Council’s cabinet today approved the terms of reference for an independent review of the Busway "fiasco". But not before concerns were expressed by some councillors. The Cambridge News has the story.

For the actual terms of reference, and some background to the review, go to the County Council website.
Posted by Hugh Taylor at 19:03 No comments:

The ticket machines on the west bound platforms at Histon and Swavesey have been out of order and boarded up for months.

Is the County Council doing anything about them? Are they going to be repaired or replaced?

Posted by Andrew Bethune at 13:46 No comments:

Anther truck has been driven onto the busway at Longstanton due, apparently, to a satnav error. A photo of the incident appears in a Cambridge News article here.
Posted by Andrew Bethune at 11:05 2 comments:

Work on busway track at Histon

Yesterday there was a 10mph speed restriction near Histon for part of the day. A team of workmen appeared to be surveying the section of track affected by settlement.
Posted by Andrew Bethune at 11:02 No comments:

There is a hint in this week's Hunts Post ( 23 October, page 24) that Whippet is planning to divert its busway route C.

A new Morrison's store that is planned for the eastern edge of St Ives close to the Marsh Harrier pub/restaurant. The article suggests that the store will be served by six buses an hour, with services 12 and  C diverted. The C currently does a loop around north-west St Ives serving Hill Rise and Ramsey Road.

Read article here.
Posted by Andrew Bethune at 09:13 No comments:

Brookgate, the major player in redevelopment of the area around Cambridge Railway Station, appears to be disputing its commitment to make financial contributions towards the guided busway and other transport initiatives, claiming that new legislation means it doesn't have to honour commitments agreed when it got permission for the CB1 development.

Of £2.4 million at stake, around £2.1 million relates to the busway. Brookgate argues that, as the busway has already been built, its contributions are no longer needed.

Posted by Andrew Bethune at 11:22 No comments:

Bus services on the busway were not running according to timetable this morning, presumably as a result of accidents on the A14 and M11.

There is a report about the accidents here.

Travelling from Cambridge to St Ives about 12 noon, I had to wait 25 minutes at New Square before a bus to St Ives appeared (an A). In all that time I did not see a B or a C going in the St Ives direction. While I was waiting, there were no buses heading in the opposite direction either.

Any other busway users affected by this disruption?
Posted by Andrew Bethune at 14:36 1 comment:

A car  got stuck on the busway  at King's Hedges this morning causing delays to bus services, according to the Cambridge News.

The article also reveals statistics of other incidents of cars driving onto the busway - 20 in the last six months, of which 18 were at St Ives.

At a recent Cambridgeshire County Council meeting it was revealed that Stagecoach's insurance company had paid £91,263 to the Council following a bus crash at Longstanon in November 2012.

Posted by Andrew Bethune at 15:52 No comments:

This year, for the first time, bus traffic in St Ives was not plunged into chaos by the  Michaelmas Fair.

The Fair takes over the main market square in St Ives and in past years the regular Monday Market has been moved out onto the bus station. As a result buses have had to use a very inadequate bus stop in The Quadrant, with all the ensuing inconvenience for bus passengers, gridlock and delays.

This year was different. The Monday Market (well, a small remnant of it) could be found in a corner of the car park between the bus station and Waitrose.

And buses were running as normal, via the bus station and Station Road.
Posted by Andrew Bethune at 08:53 No comments:

Cambridgeshire County Council is having to consider how to remedy a number of serious faults with the guided busway.

Some relate to shrinkage and heavage of clay affecting the foundation of the busway. Others concern dropping of the end of the concrete beams.

BAM Nuttall is said to have rectified a fault that required buses to slow to 5mph at Histon in the summer.

But regular travellers on the busway will be aware that buses still traverse some bad sections of track  a short distance east of Histon.

When the studlights were installed along the cycle track, the Cambridge News reported "Solar studs to light the busway bridleway"

Part way down it says:

Cllr Ian Bates, the cabinet member for growth and planning, said:  ........
“Solar studs will provide a trail route for users to follow while having no ongoing cost for the council.

Maybe they thought no maintenance would be required?

Tonight I took a photo at low point between St Ives Park & Ride and the Ouse viaduct, about 20 minutes after sunset. (Hence grainy - I have lightened it so it can be seen)

The reason:  None of the 5-10 pairs of studlights - which were all on - were visible due to the overgrown vegetation.

With no spend on maintenance, the studlights are useless here.

Last week I reported to Cambridgeshire County Council several maintenance issues on the cycle track - including hidden stud lights, and a point just west of Covells drain where the 3.1m wide path is reduced to 1.4m because of overhanging vegetation.

Track progress here. Currently says Cambridgeshire County Council not responsible - it has been referred on to ..."the appropriate party"...

Separately, I have reported to Cambridgeshire County Council the overgrown approach to the A1096 crossing between the Park & Ride site and St Ives town centre. Getting very difficult for 2 cyclists to pass. Track progress here. Currently says : We recognise that your reported fault needs addressing, and the work has been scheduled to be undertaken at the earliest opportunity.

Another letter has appeared in the Hunts Post (2 October, page 7) in response to the letter last week about lack of maintenance of the busway.

The writer, a resident of Brampton, notes that the busway is starting to resemble to railway it replaced, that the approaches to Cambridge are defaced by graffiti, and that many of the recently planted trees are leaning over or have lost their protective sleeves.
Posted by Andrew Bethune at 09:32 2 comments: