Busway journeys only half what was anticipated

An article on the Hunts Post describes the numbers of people using the guided busway as ‘disappointing’. The projection of 20,000 passengers a day hasn’t been reached - with only 11,000 a day being recorded. One reason for this shortfall is undoubtedly the fact the the new town at Northstowe has not yet been completed, indeed it’s only just started. Even so, usage has increased by 8.7% since last year, and this was hailed  a ‘success’ compared with declining bus usage elsewhere.

See https://www.huntspost.co.uk/news/guided-bus-questions-over-numbers-1-5650934
Posted by Andrew Bethune at 17:58 No comments:

Stagecoach have announced a series of changes to the A and N services from 16 September. The new timetable isn't currently available, either from Stagecoach or Traveline. Here's the Stagecoach announcement:

Service N will no longer operate. The peak time N's will be renamed to Route D and have been re-timed. These will continue to serve all stops along Milton Road. The Off-Peak N's will be replaced by a diversion of the Route A once an hour via Cambridge North Station. These will also be renamed to Route D and will also serve all stops along Milton Road.In order to maintain a 15 minute service on Route A, all Route A journeys have been re-timed between Trumpington Park & Ride and the Science Park in both directions. The Buckden journey in the afternoon will now be split at St Ives bus station. This is to enable customers who finish work at 5 at CB1 to catch a later bus and change in St Ives as these changes will see the A's depart earlier. The last A's to/from Royston are renumbered D's.
Posted by Hugh Taylor at 10:47 1 comment:

This morning's (16 August) meeting of the County Council's Economy and Environment Committee is due to discuss the Finance and Performance Report to the end of June 2018. Now, before you nod off, or navigate to videos of cats doing cute things, I should point out that this is of some relevance to the Busway.

According to the report's appendix (documents are at item 7 of the meeting agenda if you want to follow along), the 12-month rolling total of passngers on the Busway to May 2018 is 4.1 million. In May, 351,373 passenger journeys were made. Since its opening in August 2011, some 23.7 million journeys have been made.

Now, it's a little unclear whether these statistics include journeys made on Busway routes when operating on regular roads (most of Whippet's "U" service, for example; or Stagecoach's trips north of St Ives). But regadless of that sort of complication when talking about statistics, Edward Leigh, of Smarter Cambridge Transport, has been looking more closely at the figures and has noticed that the current usage is only just half of what was projected at the time the Busway was first proposed.

You can read more about this in a Cambridge News report. And Edward Leigh was also interviewed by Trevor Dann for Cambridge 105 (yesterday, I think), and that interview (covering more than just passenger statistics, admittedly) has been made available as a podcast. And is worth a listen. You can find that podcast here.
Posted by Hugh Taylor at 10:01 No comments:

Those with a long memory may recall an accident on the Busway in February 2016 (and if you don't, here's a link to our blogpost). The driver concerned was recently given a 12-week suspended prison sentence for speeding at the time of the crash. According to a Cambridge News report the bus was travelling at 53mph in a 30mph zone at the time of the accident, whilst the driver was reading a time duty card.

You can read the full Cambridge News report here.
Posted by Hugh Taylor at 09:39 No comments:

On Cambridgeshire County Council's website you can find maps of all the bus routes in the county that show all stops. Stagecoach's route A, which started life 7 years ago as a simple route between St Ives Park & Ride and Trumpington, has now reached a new level of complication, with numerous peak-hour branch routes.  You need to look at the map to fully appreciate it. 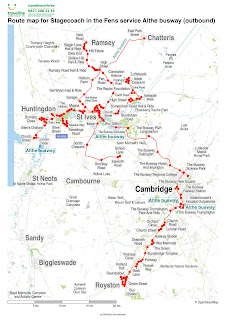 Posted by Andrew Bethune at 11:06 No comments: