Progress on the cycleway

Over the past  three weeks or so the main focus has been to construct a series of culverts to allow floodwater to pass under the cycle track and then under the busway a short distance east of the Ouse Viaduct. 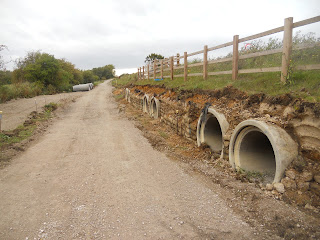 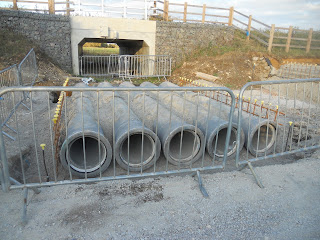 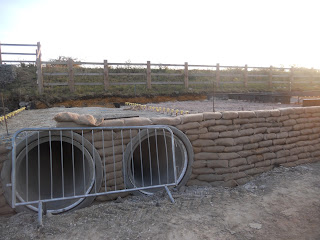 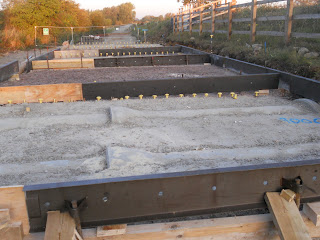 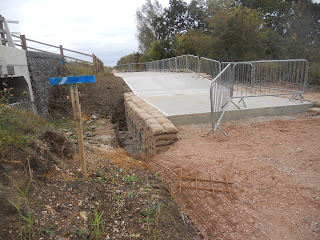 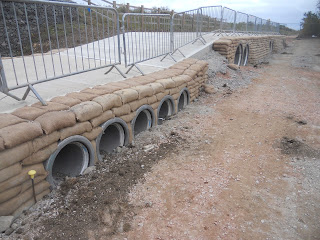 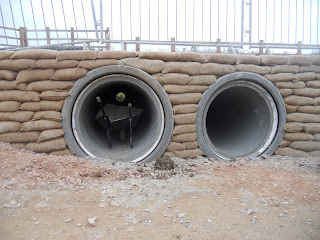 Posted by Andrew Bethune at 11:00 No comments:

Pushing on with the busway

The News & Crier ( 27 October, page 42) records that the busway was achieved 430,000 passenger journeys in its first two months - 224,000 in month 1 and 209,000 in month 2. The County Council's business case for the busway expected 150,000 a month during the first year building to 300,000 a month after 3 years. These statistics have given rise to calls for  segregated bus lanes in Cambridge, express bus services and links to other communities. Councillor Harrison notes that Phase 2 included getting the busway into Huntingdon. Councillor Lucas, representing Warboys, a large village to the north of St Ives, asked for relief buses to deal with rush hour overcrowding. An express service between St Ives and Huntingdon was called for by Councillor Kadic.
Posted by Andrew Bethune at 10:46 No comments:

The busway continues to generate stories in the local papers.

The Hunts Post ( 26 October, page 4) describes another incident with a cyclist pedalling on the trackway. He was warned by by a passing bus driver but claimed he would rather go to prison than not cycle down the busway. Bob Menzies of the County Council says there is a £1000 fine for trespassing on the busway.

On page 6, a letter from a St Ives businessman complaining about the loss of revenue to many businesses during the three days of the Michaelmas Fair, and the confusion caused to visitors to the town by changes to the guided buses as a result of the fair.

The Huntingdon & St Ives News & Crier (27 October, page 6) carries a letter from a Somersham resident who tried to catch a guided bus from Jesus Lane, Cambridge. Not only did the bus drivers fail to stop for him (3 buses went past), but  the third driver raised his middle finger to the waiting passenger. Eventually, the passenger walked to Drummer Street to board the bus, but even that bus didn't stop at Jesus Lane. After this treatment, the Somersham resident will not be using the busway again.
Posted by Andrew Bethune at 19:59 No comments:

Busway in this week's local papers

Both the Hunts Post (19 October, page 27) and the Huntingdon & St Ives News & Crier ( 20 October, page 35) pick up the theme of the high cost of the guided busway. The Liberal Democrat group in Cambridgeshire County Council claim the the Council could end up with extra interest payments of £21m if the court case against BAM Nuttall is lost.  The final bill for the busway could go over £200m. £126m has been provided by the government and developers, leaving  £90m that might have to be paid for by taxpayers' money,

The News & Crier (also page 35) notes that the bus driver who ran over a bicycle in an incident on 1 October has been disciplined.
Posted by Andrew Bethune at 18:53 1 comment:

Stagecoach has announced it will be running some 'quicker buses from Huntingdon' as from 23 October.

According to The Busway Service Updates, there are also changes to the return school day journeys with buses leaving the rail station at 1547 and 1607. These extra journeys do not appear on the  new timetable. Presumably they are running as relief journeys for service A.

The new timetable can be viewed at http://www.thebusway.info/extuploads/routesabtt.pdf
Posted by Andrew Bethune at 18:31 No comments:

New busway passengers are still struggling with the ticket machines. There is something counter-intuitive about them. While travelling  from St Ives to Cambridge earlier today, the bus paused for 2-3 minutes at Longstanton. Two groups of passengers were trying to obtain tickest from the machine.

The first group wanted Day Riders, but the mnachine gave them singles - and ther driver unhelpfully advised them they'd need to buy another ticket from the journey back.

The second pair of potential travellers appeared to give up the attempt and headed back to the car park, perhaps deciding it would be easier to drive into Cambridge. before they did so, these two had a discussion with the driver, which I overheard. They were not sure whether to get a Whippet ticket or a Stagecoach ticket, or indeed which bus company would be running the next bus to town.

This type of confusion could be avoided if the London system of 'competition at tendering for routes' stage were extended to the rest of the country. Passsengers would not then have to make decisions about which bus company to travel with.
Posted by Andrew Bethune at 14:46 No comments:

More on the cycle track

There is now a length of tar  fro a few hundred metres just west of Swavesey, and pipes are being installed about half a mile east of the Ouse Viaduct to allow floodwater to pass under the cyce track.
Posted by Andrew Bethune at 14:35 No comments:

Yesterday the first stretch of new tarmac was laid on the cycle track between St Ives and Swavesey. It's the section between St Ives Park & Ride and the Ouse Viaduct.
Posted by Andrew Bethune at 13:19 No comments:

A Swavesey resident wrote to the Hunts Post a couple of weeks ago about overcrowding on commuter buses preventing Swavesey passengrs from boarding. He writes again (Hunts Post, 12 October, page 7) to commend Stagecoach for introducing a double decker service to Cambridge Railway Station at that key time.

This is the 07.30 from St Ives Hill Rise (Service A) and it is the service I often catch to work in the morning.

It tends to run more or less in convoy with the preceding 07.00 from Huntingdon (B) , and the following 07.43(A) from St Ives Park & Ride. All three services are heavily used, often with standing passengers for the last stretch of the journey.

With large numbers of passengers joining at intermediate stops, and because buses only have one entrance door, extended loading times are contributing to delays. Last Friday, for example, the 07.30 from Hill Rise left St Ives Bus Station left a minute late, but was 9 late by the time it reached New Square.

Unfortunately the low bridge under Hills Road means that any Service A bus going beyond Cambridge Railway Station has to be a single decker - with smaller passenger capacity.

We read some weeks ago that Stagecoach were hoping to purchase some new buses. that too should help them to provide extra capacity a peak times.
Posted by Andrew Bethune at 12:23 No comments:

More on the bicycle accident

Today's Hunts Post (12 October, page 7) has three letters about the accident the Saturday before last -  a bike was crunched up by a guided bus, which then had to be take out of service due to undercarriage damage.

One thing that puzzled me about the accident was why the driver had not slowed down and stopped. It seemed that the sightlines were good, and certainly the passenger writing to the paper last week  seemed to be aware of the cyclist 'a good mile' in advance.

The first letter, from a Hartford resident, answers that question. The driver was indeed aware of the cyclist - because a bus coming the other way had warned her. So Stagecoach needs to answer the qeustion as to why she didn't stop. There are other negative comments about the driver's customer care - she didn't inform the passengers about what was going on, but stepped outside to smoke a cigarette.

The second letter (from a St Ives resident)  suggests that this was an example of dangerous driving on the basis that it is our responsibility to avoid an accident even if the other person is in the wrong. He would expect a driver behaving like this on an normal road to be prosecuted. Is that happening with this bus driver?

The third letter (by a passenger from Hemingford Grey) remarks on the irony of a busway bus having to be diverted via the A14, the very road the busway was created to bypass.

On page 13 is a short article about the incident, including comments from passenger who lives in Needingworth, reiterating that the driver could have slowed down and stopped. Andy Campbell of Stagecoach says that 'action has been taken with regards to this driver'.
Posted by Andrew Bethune at 11:59 No comments:

Every year at the beginning of October is the Michaelmas Fair, when the centre of St Ives is taken over by a giant funfair. It lasts three days - Monday Tuesday and Wednesday. Monday poses a bit of a logistical problem - the space used by the regular Monday market isn't available.

So what happens? The market moves into the bus station. 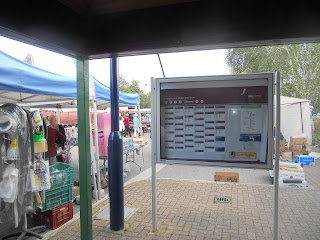 And what happens to the buses? They run to and from the bus stop in The Quadrant. This is the notice that appeared in the Bus Station - but no dates or times are given. 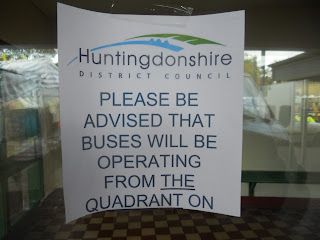 This bus stop is on a one way giratory road system, so buses bound for Huntingdon have to go right round the loop, which only adds to the traffic problems.

This year nobody had though to cancel the usual car parking on The Quadrant - so every time a bus called at the stop, all other traffic ground to a halt. The Quadrant bus stop really isn't designed for buses terminating or waiting for extended periods. Here is The Quadrant on Michaelmas Fair Monday. 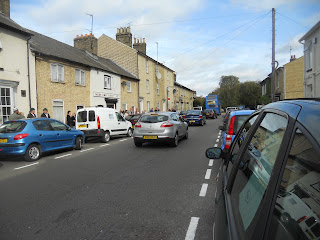 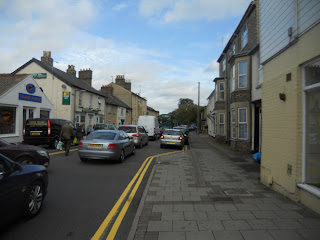 So why is this crazy situation allowed to happen? Not easy to answer. But maybe its because markets, buses and roads are controlled by different bits of local government and nobody has thought to look at the problem as a whole.

The delays caused by The Quadrant situation must have contributed to delays on the busway.

As I had to travel in to Cambridge about 12.45 I decided not to risk catching a bus from The Quadrant, but instead walked to the Park & Ride for the 12.48 Service A - which left on time and got me to my destination on time.
Posted by Andrew Bethune at 22:27 No comments:

Accident on busway - diversion via A14

A friend told me he'd been on a busway bus on Saturday that had been diverted onto the A14 because of an incident.

All is revealed in today's Hunts Post ( 5 October, page1). There was a cyclist on the bus tracks and he didn't respond to the bus sounding its horn repeatedly. The cyclist had headphones on and therefore couldn't hear the bus. Fortunately he managed to dive off his bike just in time, but the bus ran over the bike crushing it to bits. The bus was damaged too and had to be taken out of service.

A passenger on the bus said 'For a good mile the driver was beeping her horn'. That implies the driver saw the cyclist from some distance away. If that was the case, why did she not slow her bus right down, so as to be able to stop before hitting the bike?
Posted by Andrew Bethune at 23:14 No comments:

In the The Hunts Post of 21 September was a letter complaining about people using St Ives Park and Ride to park and then taking the bus into St Ives town centre in order to avoid paying town parking charges.

A follow-up letter (28 September, page 7) points out, correctly, I think, that this is a legitimate use of the park & ride, and it's not so much to avoid parking charges, as to actually find a parking space on market day. There is a supplementary point - about whether 'old age pensioner' should get free parking.
Posted by Andrew Bethune at 07:56 No comments: