Dispute settled out of court

Cambridgeshire County Council today released a statement that they have settled the dispute with BAM Nuttall, builders of the guided busway, out of court.  The statement can be read here.

The agreement is said to be £76 million in the Council's favour. The Council has paid BAM Nuttall £84.7 million as against the original price of £83.9 million.

This news is also reported by Cambridge News here.

Posted by Andrew Bethune at 14:34 No comments:

As usual for a Bank Holiday Monday, St Ives Bus Station is closed today because it is full of market stalls. But Station Road  is clear of stalls, so Cambridge-bound guided buses can call at their usual stop there.

But I could see no signs up at the bus station advising travellers where to catch their buses.

I could find no information on the Stagecoach website or on www.thebusway.info

The bus timetable available on Cambridgeshire County Council website for Stagecoach route B shows the timetable for Bank Holiday Monday, with west bound buses calling at St Ives Bus Station Bay 4  - which is plainly impossible because of the market stalls.

A temporary bus stop in Station Road for west bound buses would be a simple way to solve the problem.

There are signs up in The Quadrant advising motorists not to park there because the spaces would be needed for buses. 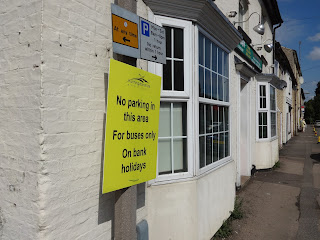 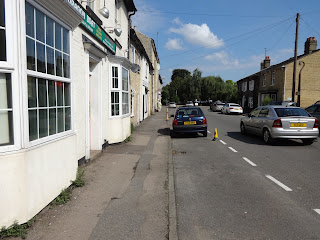 Posted by Andrew Bethune at 10:11 No comments:

This week's Hunts Post (21 August, page 16) says that the busway has carried 3,096,370 passengers in its second year of operation. This comes close to achieving the target of £3.15 million  which had been projected for the busway's third year of operation. Stagecoach reckons the high level of usage is due to reliability of the journey and the quality of the vehicles. Both Stagecoach and Whippet hope that usage will rise once the Northstowe housing development gets under way.

I noticed last week grass has been cut about 1.5m wide strip adjacent to the bus track (but not along sides of cyclepath) between Swavesey & St Ives.

As of Friday evening, no sign of it having gone onwards towards Cambridge.

Do they have a guided grasscutter?

There are a number of places where the grass / hedges / brambles beside the path are in need of trimming; it is particularly bad near Histon stop:

I would say this is dangerous – if you catch a bramble in your face whilst cycling it could be nasty.

I have not been along in the dark, but I guess many of the stud lights are obscured by overhanging weeds.

I note the trimming of the grass strip beside the bus track has now continued, and conclude from the marks left that we don't have a guided grass-cutter, but a person with a strimmer.

I've had no response from County Council, and not seen much signs of action.
I now carry a fold-up pair of secateurs, and have stopped and clipped off a few of the worst brambles, (blackberry and roses) that I have noticed in a few places.

Linked with above - and discussions on more recent posts on the recommended width of cycle track, this morning I measured the width of the track on the slope westward down from Covells Drain. (This is to the section that floods longest between Swavesey & Fen Drayton) . The track is 3.1m wide, but the vegetation was hanging over by 1.1m on the left and 0.6m on the right leaving a gap of just 1.4m, or 45% of what it should be.

Thanks to David Parish for getting in touch by email about the cutting of the grass verges along part of the busway.

David's comments and  photos now appear in the next blog post (19 August).

The comments attached to this topic should be read in conjunction with the 19 August posting.

The dispute between Cambridgeshire County Council and BAM Nuttall, the contractor who built the busway, continues. The County Council's cabinet has convened a meeting to update certain councillors on progress with the dispute. The meeting will be on Friday 9th August, but will be held in private.

The agenda for the meeting can be found on the County Council website here . It explains why the public and the press are excluded from the meeting and also names the councillors who are eligible to be present.
Posted by Andrew Bethune at 18:46 No comments: