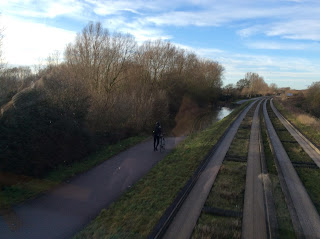 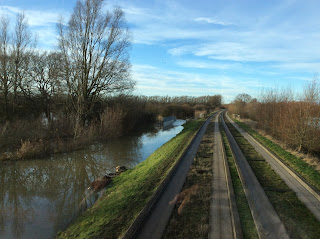 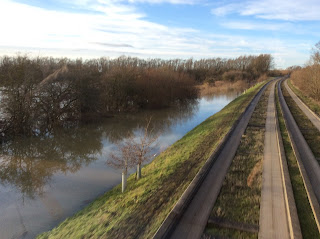 A long stretch of the busway cycle track between St Ives Park & Ride and Fen Drayton Lakes is currently under water, as these photos show.
Walking or pushing your bicycle along the grass verge next to the bus track is dangerous, and is not recommended.

Arthur Henderson, generally credited with coming up with the concept of kerb-guided busways back in the mid-60s, died on December 4th, aged 93. He was an engineer and for a time had a consultancy as well as leading something called the "Traffic Research Centre", which owned a small fleet of vintage buses, some of which were roadworthy and were occasionally seen on roads in the Cambridge area.

I have seen it suggested that he was involved in some way with the Adelaide guided busway (opened 1986).

I knew Arthur very slightly, in a non-transport context, but had no idea of his professional accomplishments.

Perhaps other readers of this blog have their own memories, or can provide additional detail. If so, please add a comment to this post.
Posted by Hugh Taylor at 12:31 1 comment:

"The closure of the guided busway at Impington will extend into the new year, when a month of repairs begin that will also require the closure of a section of the cycle path.

"Work to widen the bridge in the village has prompted a lengthy closure of the busway underneath. But damage caused by the sheet piling work means the busway needs some repairs.
"Cambridgeshire County Council and Highways England have confirmed that these will begin on Monday January 6 and last for around a month, during which time the cycle path/maintenance track alongside it will also be closed"
Not good news for foot and cycle travellers :-\

Posted by Stephen Lawrence at 23:16 No comments: 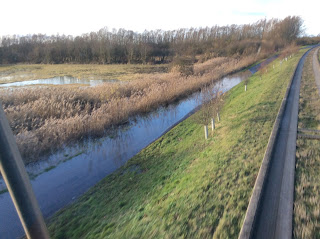 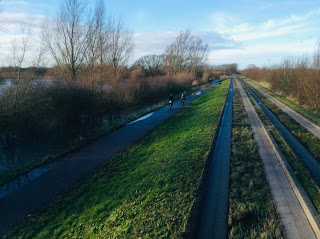 The cycle track along the busway has water lying on it between St Ives Park & Ride and Fen Drayton Lakes. Currently (Sunday afternoon) the water appears to be shallow and cyclists and pedestrians seem able to get through.

If you are cycling that way over the next few days, please keep the blog updated.

Bus services close early on 24 and 31 December, and here is a link to details of the last services on those two days.

https://www.stagecoachbus.com/promos-and-offers/east/christmas-2019/busway-christmas
Posted by Andrew Bethune at 21:23 No comments: