It’s possible now to cycle or walk between St Ives and Fen Drayton Lakes, but there is a lot of debris on the track, so take care. 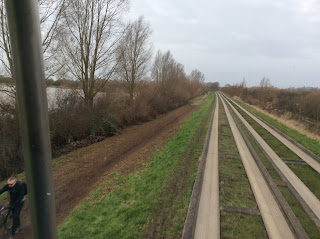 Between Fen Drayton Lakes and Swavesey, the cycle track is under water, so a detour off the busway is still necessary. 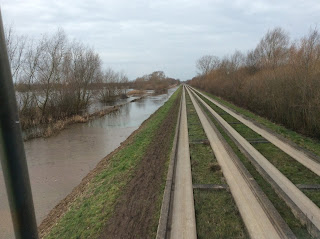 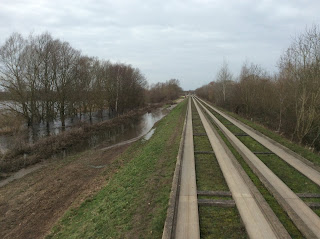 This map extract may help. Please note that the drove which runs past Swavesey Windmill is only designated as a footpath, not a bridleway. 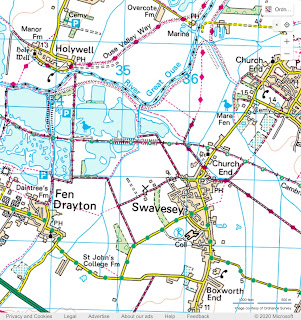 Posted by Andrew Bethune at 08:52 No comments:

These photos were taken today (22 Jan) to illustrate that the cycle track is still flooded. The gates are closed across the track near St Ives Park & Ride and Swavesey, which should indicate to walkers and cyclists not to proceed any further. But still there are nutters who risk their safety by walking and wheeling their bikes along the grassy strip next to the bus track.
It looks as if it will soon be possible to cycle from St Ives to Fen Drayton Lakes, as the water level is rapidly dropping. You might be able to get through on foot if wearing wellies.
East of Fen Drayton Lakes, the flooding seems likely to persist for sone time (se David Parish’s posts). But it is possible to avoid this stretch by detouring via gravel tracks to Swavesey, and rejoin the busway there.

Last week there was more rain, and the track is now flooded deeper than it was.

Note the top of the fence behind the ditch is only just visible above the water.

The pipe draining into Covills drain is well under water, but obviously flowing because of the amount of turbulence on the the water above the outlet.
Towards the river Ouse, there is a much larger flow of water - draining the Ferry Lagoon into Colvills drain - back over the breach in the bank. After the level falls a bit more, this flow will stop.

Even if there is no more rain, based on previous experience, it will take at least into March before this section of the track is drained.

Posted by David Parish at 11:00 No comments:

[UPDATE 13 Jan, 0835. A friend spotted Stagecoach's announcement of the changes detailed below on the Stagecoach East "Promos and Offers" web page - yes really! That's the only place the information is provided - and it's less complete than my attempt below.

Here are links to: (a) the announcement, and (b) the new timetable.

I was taken by surprise at St Ives Station Road stop this morning to see a new departure sheet posted. I've checked both the Stagecoach and County Council Busway websites and can find no details of changes to services (or even a simple announcement). But new timetables are available from Traveline, and I've attempted below to identify the changes involved.

Note, first, that there are no changes to Sunday services.

As for the rest of the week (including Saturdays)... The most significant changes are to routes A and D. There seems to be a significant increase in journey times on the stretch between Orchard Park and St Ives town centre. How is this reflected in the timetable?

On city-bound trips, most services will depart St Ives 7 minutes (or thereabouts) earlier than at present, and operate 7 (or so) minutes earlier to Orchard Park. Thereafter timings seem unchanged.

On St Ives-bound trips, most services will depart from the city stops as at present, but after Orchard Park will run 7 (or so) minutes later than at present.

There seem to be changes to how the services are being organised in St Ives beyond the town centre. In addition to changes to the times of buses, there may be some switching of routes between the A and the D (and possibly changes to the routes themselves). Check the new timetable carefully!

There are minor changes on route B, affecting - so far as I can see - only the indicative times at intermediate stops. So, for example, outbound services will notionally call at Shire Hall 3 minutes after leaving Drummer St, 2 minutes earlier than at present. (But this seems a pointless change, since it's rare for buses to arrive by the indicative time even on the 5-minute schedule, so why they're any more likely to reach the Shire Hall a full 2 minutes sooner defies logic!)

There seem to be no changes to services south of Trumpington, nor to route B services north of St Ives.

I apologise if I've missed something that's key to an individual reader's particular journey, but there was a lot of data to wade through. And I was aware that those of you heading off for your Monday commute might appreciate some advance warning.

(When I checked at 2300 on Jan 11 the new timetables were not available on the Stagecoach website, only from Traveline.)
Posted by Hugh Taylor at 23:18 No comments:

Why does the track take so long to drain?

Thanks to Andrew's last post showing how flooded the track still is. I agree this will take a while to drain (typically at least a month when this stretch floods)

I observe as follows:

With reference to this RSPB leaflet with map:

The stretch that takes ages to drain is where the busway passes between the Trout Pond and Ferry Lagoon.
Typically this section is not the first to flood. Rather the river has to very high before it does flood. But when it floods the water gets trapped.

Covills drain is not marked on the map - it lies just east of the Trout Pond, and runs south to north and drains into the Great Ouse through a flood control gate. Cyclists can identify it by the wedge shaped chunk of concrete across the path where it crosses the east bank of the drain.

When the water gets very high, Covills drain overflows its west bank, pouring water into the Ferry Lagoon. This happened 2 weeks ago.
The observant will note that the west bank of Covills drain is deliberately lower than the east bank (there is only one concrete wedge, not two). This is so the lakes flood in preference to Swavesey.

But how does it drain?  Once the level has got back down to the top of the Colvills drain bank - very slowly.

If you walk along the east bank of Colvills drain about 50-100m north of the busway, you will see across the drain the end of a pipe, which drains the surplus water from Ferry Lagoon through the west bank back into Colvills Drain.

As far as I know (but I am happy to be corrected if anyone knows better) this is the total drainage from the Ferry Lagoon + Trout Pond back towards the river.

This is not very big to drain all that trapped water down by about 1m.  And as the draining continues, the difference in height falls, so the flow through the pipe drops too. 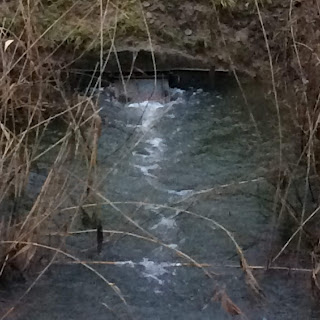 The above photo, taken 31 December, shows water coming out of the pipe - which is completely submersed under water. 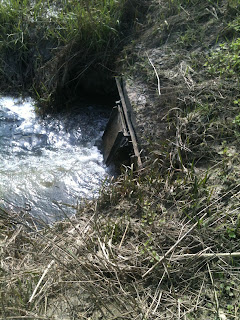 This photo, I took a few years ago, looking down on the outlet, with the water lower, shows the flap over the end of the pipe, to prevent water flowing back into the Ferry Lagoon from Covills drain. The flap is pushed open when the water flows in the intended direction, as it is here.

But why is this flow so restricted? 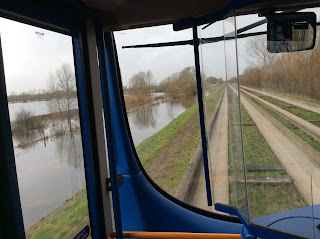 This photo, taken from the bus this morning, shows the busway cycle track is under water between Swavesey and Fen Drayton. From past experience, the water is likely to remain here for some time.

The busway cycle track between Histon and Orchard Park will close for a month while repairs are carried out. This is the section of busway affected by the A14 widening works, and has been closed to buses for half a year, with buses diverted meanwhile.
https://www.cambridge-news.co.uk/news/cambridge-news/cyclepath-guided-busway-a14-closure-17508409
Posted by Andrew Bethune at 20:51 1 comment: