The Stagecoach R Service (Trumpingtion to Cambridge Station) has returned to a 15 minute service at peak times.  Not everybody is happy. The service now diverts to Cambridge Biomedical Campus, (not necessarily picking up or dropping off any passengers) and this delay means early morning commuters are now missing their direct trains to London.   You can read the story here in the Cambridge News.
Posted by David Parish at 20:52 No comments:

Controversy over bollards is not new, but in recent weeks some of the bollards along the maintenance / cycle track have been changed.

It appears this has only been at the major road junctions, and only the centre of the three bollards has been changed. Some at the lesser crossings, just as dangerous, have not (yet?) been changed.

Note the old bollard remains in front of the new one. Both it, and the other 2 are lowered.


Note the reflector is white.


Note the reflector is red.

The bollards appear the same as the ones on the new busway extension to to Cambridge North station reported on this blog here,... except for the reflectors. There you will see not one, but three bollards with orange reflectors on both sides. The new ones have red reflectors one side and white the other.

Why this difference? Maybe(?) red means 'Danger' - you are approaching a junction, and white means you have left it.

However, there is a stud light just in front of the bollards, (I can't remember what colour), which does not rely on reflecting light from the cyclist.

But why only one new style bollard?
- maybe one is enough (and the others will be left down)?
- maybe to leave enough room for the Multihog to grit the track without having to stop so often?

Anybody have any more information on the reasons behind this change? 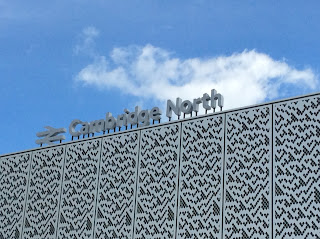 Beautiful spring day for the opening of Cambridge's new station. 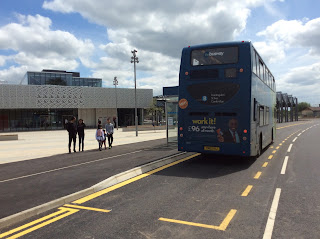 The A bus to St Ives about to depart from the new bus stop outside the station earlier today. It's linked to Milton Road by 500 metres of bus-only road, with a short length of guide rail at each end. Through buses to/from St Ives only run at certain times of the day, but at other times St Ives-Cambridge North passengers connect at Longstanton. The bus journey between St Ives and Cambridge North is quicker than that between St Ives and Huntingdon Station, so it offers a viable alternative route to/from London.
Posted by Andrew Bethune at 16:57 No comments:

Update from Stagecoach about the revised busway services

Stagecoach have just sent out an update message by email which summarises the changes to the busway timetable resulting from the opening of Cambridge north Station. You can read it at this link .
Posted by Andrew Bethune at 06:54 No comments:

The new timetable, which starts on Sunday 21 May, for busway services that will be calling at Cambridge North Station has been posted on Cambridgeshire County Council's busway website http://www.thebusway.info/ .  This includes all journeys on routes A, B, D, N and R.

The timetable is also available on Stagecoach's website at https://tiscon-maps-stagecoachbus.s3.amazonaws.com/Timetables/East/HYBRIDS/The%20Busway%20Complete%20-%20HYBRID.pdf

The pdf shows the current timetable ( i.e. valid until 20 May) followed by the new timetable ( but no start is shown on the pages listing new services D or N and revised services A, B and R).


Posted by Andrew Bethune at 12:03 No comments:

Train timetable for Cambridge North Station from 21 May 2017

Timetables for the new Cambridge North Station, which opens on 21 May,  and connects to the Cambridgeshire Guided Busway, can be viewed on the Abellio Greater Anglia website  at https://www.greateranglia.co.uk/sites/default/files/assets/download_ct/ga1705_web_regional_table_10.pdf

and on the Great Northern Rail website at https://www.greatnorthernrail.com/travel-information/plan-your-journey/timetables .
Posted by Andrew Bethune at 15:06 No comments:

Timetables for the guided buses that will serve Cambridge North Station from 21 May can be viewed at https://www.cambridgeshire.gov.uk/residents/travel-roads-and-parking/buses/bus-timetables/

There will be two completely new routes:

Service  D will run between Cambridge and St Ives via Cambridge North during peak periods Monday-Friday only - to Cambridge in the morning, and from Cambridge in the evening. Some of these journeys will start from or continue to some of teh towns and villages north and west of St Ives.

Service N will link Longstanton Park & Ride and Cambridge North throughout most of the the day Monday-Saturday. A few morning journeys will start from St Ives, and a few evening journeys will continue to St Ives.

Two existing routes will be amended to serve Cambridge North at certain times:

A few Service A journeys towards St Ives will serve Cambridge North, Monday to Friday early evening. Service A will run half hourly between Drummer Street and St Ives via Cambridge North on Sundays.

Citi 2 will serve Cambridge North daily.
Posted by Andrew Bethune at 14:35 No comments:

I've received this message about changes to the busway service B during part of Sunday 7th May:


Disruption to Busway on Sunday 7th May 2017
Dear Busway user
Due to an event taking place in Cambridge on Sunday 7th May, the Busway B will need to use a different route between Histon and Cambridge between approximately 1130 and 1320
During this time we will use the "A" route, which means we will not be able to serve any of the Orchard Park Stops, Jesus Lane and Shire Hall.
Customers in Orchard Park should use the Busway stops at CRC during the closure. Customers can also use the Citi 1 from Kings Hedges Road to/from Central Cambridge or the Citi 8 from Histon Road to/from Central Cambridge/Histon
Normal service is expected before 1130 and after 1320
Please note that other Stagecoach services within Cambridge will also be affected. Please click HERE for details
We are sorry for any inconvenience this may cause due to the factors outside our control
Best wishes
The Busway Team
Posted by Andrew Bethune at 17:33 No comments: