Stagecoach East are in the process of gaining feedback from their busway passengers regarding 'audio stop announcements' at each bus stop.

As noted in an earlier posting on this blog, Stagecoach have also been introducing visual stop information on routes A and B. The survey is seeking passengers' opinions on 'visual stop display' too.

If you complete a survey form and provide your name and contact details, you'll be entered into a prize draw to win up to a month's free travel.
Posted by Andrew Bethune at 14:42 1 comment:

Bridge Street in Cambridge will be closed to traffic from 20.30 on Tuesday 12 November until 06.00 on Wednesday 13 November. Buses will not be able to call at Round Church Street and Jesus Lane, and will be diverted via Victoria Avenue. 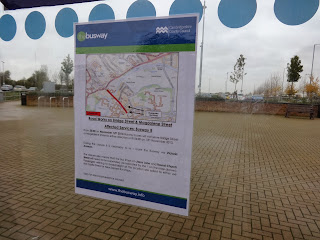 Posted by Andrew Bethune at 21:53 No comments:

I think the Cambridge News headline (online version) says it all:

Construction work has recently begun on another guided busway project - this one in Leigh, between Manchester and Wigan. The guided section will be just 4.5 miles, and forms part of a much larger "bus priority" scheme in the Manchester area.

As with most of the Cambridge and Luton busways, the guided section is on an old railway alignment; this one sits on the trackbed between East Bond Street in Leigh and Newearth Road in Ellenbrook.

More information about the project can be found here. And there's the inevitable press release.
Posted by Hugh Taylor at 23:23 1 comment: 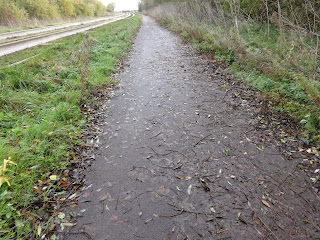 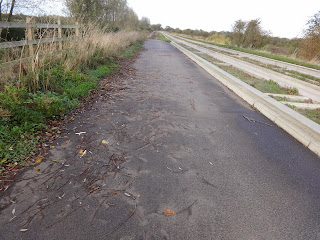 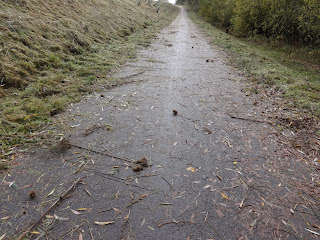 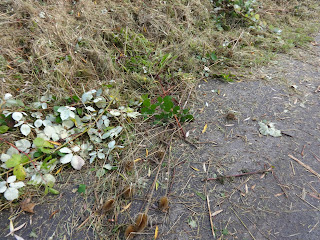 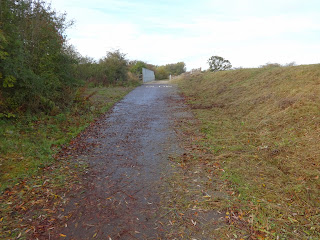 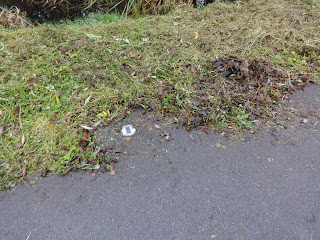 Good story in the Cambridge News about a busway driver stopping to free a sheep that was caught n some brambles. View article here.
Posted by Andrew Bethune at 22:18 No comments:

The busway has now carried over 6 million passengers since it opened in 2011.

The Cambridge news quotes Councillor Ian Bates as saying, in effect, that the busway means you don't have to worry about traffic on the A14 and A428. If only that were true!  Has he never travelled on the busway when A14 gridlock has caused gridlock in Huntingdon and St Ives, with knock on effects on buses?

The busway does offer consistent times on the busway section, but off-busway conditions frequently cause problems.

Peter Lee of Whippet is calling for more segregated routes within Cambridge.

Cllr Bates also talks about providing other busway routes in the area, specifically links to the new Alconbury development.

View article here.
Posted by Andrew Bethune at 20:32 No comments:

Yesterday I decided to catch the 0930 Whippet from St Ives Park & Ride to Cambridge Railway Station. This is shown quite clearly on the busway website timetable here as running to the Station, arriving at 10.09 - in time for me to catch the 10.15 train to London. on boarding the bus the driver told me the bus only goes as far as Drummer Street. When I queried this he told me that the bus has never gone to the railway station.

On that bus were some Whippet busway timetable leaflets 'effective from Monday 9th September 2013' - these leaflets show the bus as running to the railway station.

Whippet's online timetable, however, conflicts with their printed timetable.

So can I appeal to Whippet to get their information right?

I wasn't the only person wanting to use that bus to get to the station. Another passenger tried to board at Longstanton and was effectively turned away by the driver.
Posted by Andrew Bethune at 09:12 2 comments:

Cambridge's annual firework display takes place on Tuesday 5 November on Midsummer Common. This necessitates some temporary road closures and changes to bus route A, B and C between 6.30 and 8.30pm.

During this closure busway services will not serve the inbound stop (i.e. towards Cambridge) in Roundchurch St and both the stops in both directions at New Square.  Passengers wishing to travel from New Square should use Drummer Street as an alternative for routes A, B and C.