Busway extension to Peterborough 'an experiment'

According to the Cambridge News, the extension of Stagecoach's busway service B to Peterborough is an experiment. The article also covers the worrying fact that some of the advertised services to Peterborough  terminated at Huntingdon last week. This is being blamed on driver confusion or coming to the end of his/her shift. It would be charitable to think these problems are just teething troubles, but  poor organisation and inadequate driver training seem more likely culprits. Stagecoach really have no excuse - after all they have been in the business of providing bus services for years. 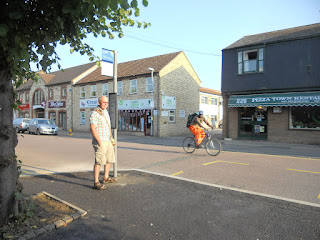 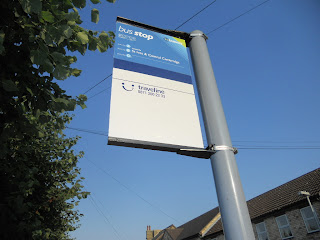 Posted by Andrew Bethune at 14:53 No comments:

Nothing as far as I can see about the new bus timetable and the extensions of services to Peterborough, Hinchingbrooke, Wyton Camp and Burley Road. But there is a letter from  Needingworth resident about the chaos at St Ives Bus station on Monday morning. The writer comments that there were no new timetables on dispaly, and only one Stagecoach employee on hand to redirect passengers to the new stop in Station road. In Station Road, traffic congestion built up on two occasions due to a lorry unloading at Petzone and  an ambulance parked opposite the bus stop. Also noted is that lack of a waiting shelter, and a concern that large numbers of waiting passengers could block the pavement . Hunts Post (25 July, page 6)
Posted by Andrew Bethune at 13:58 No comments:

Sometime yesterday (Monday) a poster was put up in St Ives Bus station advising passengers to go to the new bus stop in Station Road if they wanted to travel towards Cambridge. This should have been in place before start of service on Sunday, and it would have been even more helpful if advance notice had been given.

My bus home last night (the Trumpington to Chatteris service) appeared on time at Parkside showing the destination 'St Ives'. The driver seemed unaware that the bus was going beyond St Ives, which did not give passengers any confidence that they'd get home. A change of drivers  happened at St Ives Park & Ride, and the new driver was able to confirm that passengers for Ramsey Road and Fenton Road, Warboys, would get to their destinations.  Another passenger mentined to me that about 11am a whole string of buses turned up at Station Road, indicating that the new timetable had got very out of sync.

This morning I caught the 07.22 A which arrived in New Square about a minute late.  A close look at the new timetable shows that the A now takes 2 minutes less than the B between Central Cambridge and Histon. In the old timetable, the A was regularly early getting into Cambridge, and could often catch up a few minutes on the way out of Cambridge.

Please keep writing comments on the blog about the teething troubles of the new timetable.
Posted by Andrew Bethune at 08:45 7 comments:

My intention was to catch the 0737 service A from St Ives to Cambridge this morning. The 0730 B left the new Station Road bus stop on time, but the 0737 did not show. I boarded the 0745 B, which left more or less on time and reached Cambridge 7 minutes late. Live bus times were not showing for the A at the intermediate stops, so I have no idea whether the bus was cancelled or just running late.  Under the previous timetable, the service A towards Cambridge could usually be relied on for keeping good time. It remains to be seen whether the new timetable will offer this level of reliability. Still no sign of new timetable information at St Ives bus station.
Posted by Andrew Bethune at 09:07 11 comments: 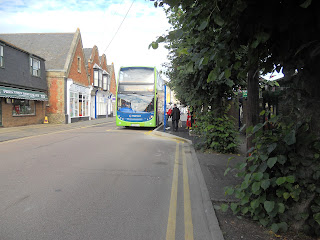 The new bus stop in Station Road, St Ives,  appears not to be ready for the start of the new bus timetable on Sunday. Although 'Bus Stop' has been painted on the roadway, the final tar surface of the bus stop has not been laid, there is no shelter for waiting passengers, and the 'bus stop' sign is a temporary one. The  new Stagecoach timetable is due to start on Sunday, with the 08.40 departure from St Ives to Cambridge as the first departure. 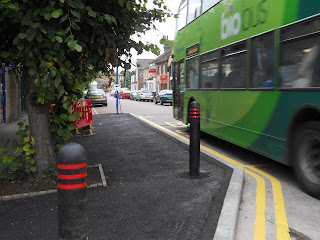 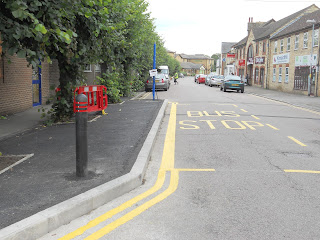 Posted by Andrew Bethune at 18:50 No comments:

There is now only one very short section of the cycle track under water - close to the small concrete bridge a short distance east of the Ouse Viaduct. From the bus this morning I could not see how deep the water was, but the floodd was shorter, and therefore must be shallower than it had been on Sunday evening when I managed to cycle through this flooded section.

Friday 20th  - morning - cycle track looks passable though a small amount of water is still lying  near the small concrete bridge.
Posted by Andrew Bethune at 09:26 No comments:

Bus services to villages between Huntingdon and Peterborough

As noted in earlier posts, extension of the busway service B to Peterborough means that Stagecoach is withdrawing its service 46 between Huntingdon and Stilton, and leaving several villages with no bus service. The Hunts Post ( 18 July, page 21) reports that Nene & Ouse Valley Community Transport will provide a bus service linking Huntingdon with Alconbury Weston, Sawtry, Glatton, Norman Cross and Stilton. There will be about 6 daily journeys.
Posted by Andrew Bethune at 09:16 3 comments:

A bus driver has expressed his concerns about safety aspects of the new bus stop for Cambridge-bound busway buses, which is due to come into service on Sunday 22nd July. See Hunts Post (July 18, page 9). The new bus stop projects 6 feet into the road, and  when a bus is stopped there, three-quarters of he roadway will be occupied. THis has implications for other traffic trying to pass the buses, given that sight lines are poor.
Posted by Andrew Bethune at 09:05 No comments:

Today's Cambridge News (17 July, page 3) includes a photo of the flooded cycle track, and a comment from Cambridgeshire County Council.
Posted by Andrew Bethune at 10:09 4 comments:

Posted by Andrew Bethune at 09:35 No comments:

The busway cycle track is under water for about 400 metres just to the east of the Ouse Viaduct.  At about 6pm Sunday, the water was 25 cm deep and rising. 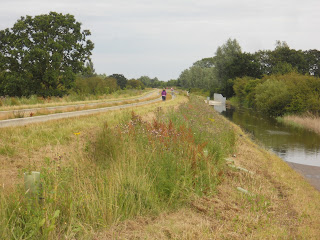 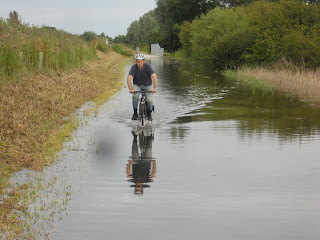 Stagecoach has published its new timetable for routes A and B due to start from 23 July. Timetable posted here.

Early morning journey from Somersham and Chatteris continue to be available, and a couple of new early morning services run from Ramsey and Warboys to Cambridge. There are similar return journeys to these places in the evening.

There are two buses an hour to Hinchingbrooke Hospital and one an hour to Peterborough.

Huntingdon Railway Station is served by only one bus an hour, but, of course, the Hinchingbrooke services stop on Brampton Road just outside the Station.
Posted by Andrew Bethune at 18:58 1 comment:

The Cambridge News reports that a steps are to be built linking the Hills Road Bridge with the guided busway path below. This will provide a pedestrian shortcut to/from Cambridge Rail Station. Due to the constricted site, a cycle path cannot be provided, but there will be a channel beside the steps allowing cyclists to wheel their bikes. Cambridgeshire County Council has voted £500,000 for the project.
Posted by Andrew Bethune at 13:59 No comments:

Nature and the busway

As a regular traveller between St Ives and Cambridge, I have been amazed and inspired by the magnificent display of wild flowers on the busway verges - ox eye daisies, poppies, mullein, mallow, Queen Anne's Lace to name a few of the more prominent species. Now many of the flowers have reached the seeding stage, and in the last few days the verges adjacent to the tracks have been trimmed. But the untrimmed areas further from the bus tracks are still looking glorious.


Evidently some residents of Orchard Park feel that these colourful verges are simply 'weeds'. See report  by Chris Havergal in the Cambridge News. The comments posted on the newspaper's website about this are interesting. There seems to be a split between those who think the 'weeds' are a blot on the landscape, and those who welcome these lush verges as a haven for wildlife.
Posted by Andrew Bethune at 13:49 No comments:

Work has begun on creating  a new bus stop in Station Road, St Ives. This is intended to ease congestion in St Ives Bus Station and means that Cambridge-bound buses on Routes A and B won't have to loop around the bus station. The stop will project out into Station Road at the front of Coral betting shop and the Hyperion auction house. The site of the bus stop has now been marked on the roadway. 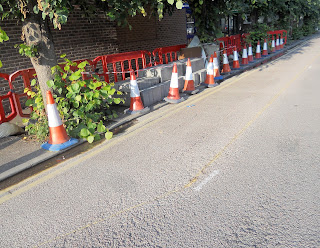 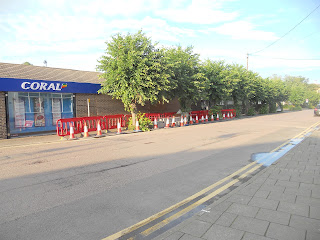 Progress at end of Day 1 of works (9 July) - a conduit has been installed across the road, possibly for electric supply to the new bus stop. 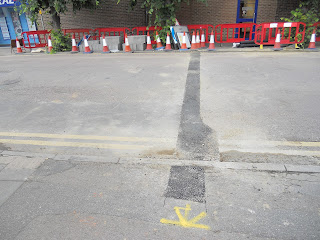 End of Day 2 (10 July) - bus stop kerb has been partly built -  temporary traffic lights were in operation, causing traffic congestion and delays to buses to and from the Bus Station. 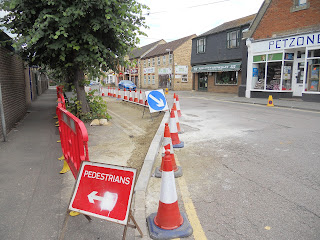 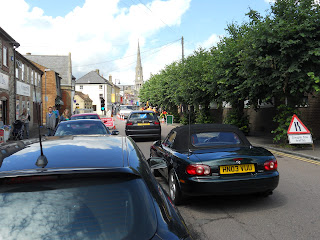 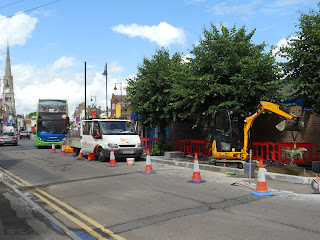 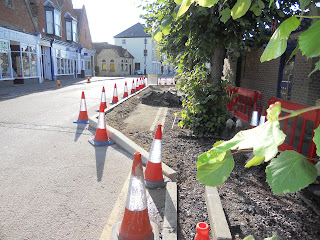 End of Day 5 (13 July) - nothing seems to have happened today either, which is worrying as the new bus service is due to start in just over a week.

End of Day 6 (16 July) - the new bus stop now has its base layer of tar. A sign saying 'Temporary Bus Stop' has appeared, which perhaps suggest that the buses will start calling there before work has been completed. 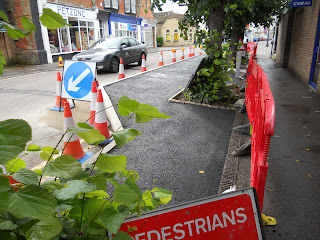 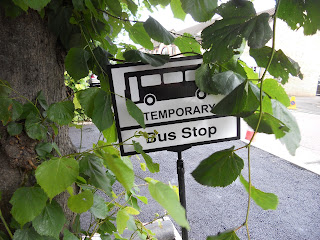 End of Day 7 (17 July) - two bollards and a post which will perhaps carry the bus stop sign have been erected. 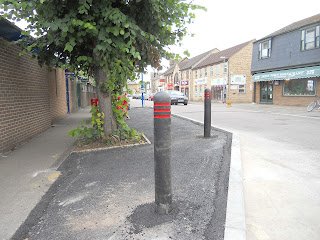 End of Day 10 (20 July) - the bus stop has now been marked out on the road in yellow, but the final tar surface of the bus stop has not been laid, and there is still a temporary sign in place. There is no shelter for waiting passengers.

The busway has been shortlisted for the most innovative transport project in this year's National Transport Awards. See item in Cambridge News.
Posted by Andrew Bethune at 17:07 No comments:

The timetable for the busway service B extension from Huntingdon to Peterborough is now available on the Cambridgeshire County Council website here. Or here.

Link to Studley's tidied up version of the Peterborough-Cambridge timetable here.
Posted by Andrew Bethune at 21:39 6 comments:

Roadworks affecting route A at Addenbrooke's

Stagecoach East have issued a bulletin about roadworks taking place at Addenbrooke's:

In addition to this buses will be unable to serve the bus stop at the out-patients centre between 0700 and 1400 on Saturday 7th July 2012.

Customers are advised to use the stops in Keith Day Road as an alternative for both closures.
Posted by Andrew Bethune at 12:01 No comments: