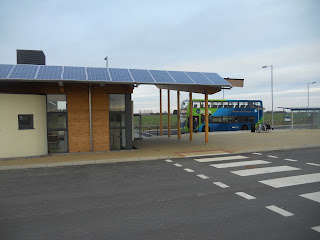 Inside is a display describing how the building has been constructed. 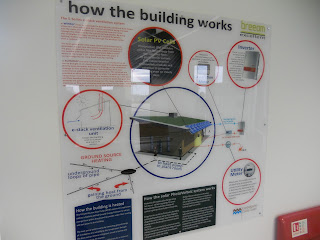 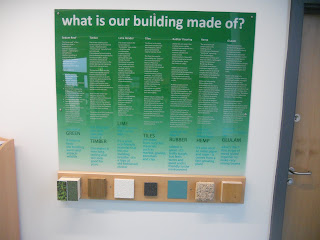 This image gives an impression of the interior: 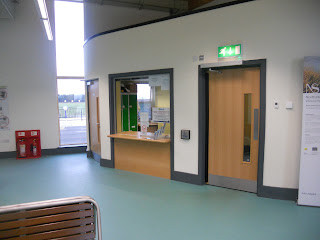 When I visited a couple of weeks ago, there were also exhibitions  about the proposed new town of Northstowe, which will be on the west side of the busway between Longstanton and Oakington; and about busway wildlife.

Outside the terminal building is a bus stop evidently intended for use by local buses. But so far no other bus routes have been introduced or diverted to connect into the busway at Longstanton. Even Stagecoach's Service 5 which serves Fen Stanton, Fen Drayton, Swavesey, Over and Longstanton does not connect with the busway, although it has potential to do so at both Swavesey and Longstanton Park & Ride. 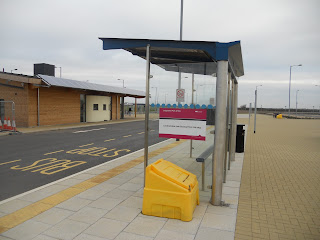 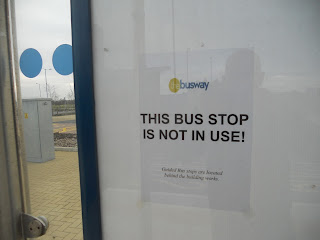 St Ives Park & Ride should have had a terminal building, but it was  cancelled in order to save money on the busway construction project.
Posted by Andrew Bethune at 20:36 No comments:

The exchange of views between Tim Phillips of Cast.Iron and Sawtry resident Roger Cox about whether reopening the railway would have been better than constructing the busway continues in this week's Hunts Post ( 25 January, page7).

Another letter from Mary Hodge of St Ives (same page) complains about the busway's poor timekeeping during the morning peak. On 18 January her bus from Ramsey Road at 07.45 did not reach Shire Hall until 08.55. The delay appears to be due to the traffic lights on Harrison Road causing a back-up of traffic through central St Ives. In fact, all car traffic to St Ives Park & Ride has to use the Harrison Road/Meadow Lane roundabout, which must surely have the effect of adding to the problems. A work colleague of mine today mentioned that it had taken longer to get through central St Ives ( by car) than it took to drive from St Ives into Cambridge. That is perhaps a measure of the traffic congestion within St Ives, which the busway cannot alleviate. I worry that if the service A is extended to start from Ramsey Road, its punctuality heading onto Cambridge, which has up to now been good, will be compromised.

On page 10 of the Hunts Post ( 25 January), it is reported that the new bus stop  for guided buses in Station Road, St Ives,  has been approved by Cambridgeshire County Council's Traffic Management Joint Area Committee. It will be outside Hyperion auction house. St Ives Town Council will seek a traffic management order to enable police to fine drivers stopping opposite the new bus stop. the stop will enable the doubling of bus service frequency from St Ives Park & Ride to Ramsey Road. A proposal to introduce extra angled bus bays in the bus station was rejected.
Posted by Andrew Bethune at 20:16 No comments:

The legal dispute between Cambridgeshire County Council and the busway contractors BAM Nuttall could take two years to resolve ( Hunts Post, 18 January, page 11). The Council is claiming £52.5 million from the contractor for defects which were never rectified, and for penalties for time overruns.
Posted by Andrew Bethune at 16:56 No comments:

But was the guided busway the right option in the first place? A letter ( page 7) from Tim Phillips, chairman of CAST.IRON, the group that campaigned for reopening the St Ives railway, refutes the arguments made by Roger Cox in the Hunts Post of 11 January. In particular, he questions whether the busway can ever pay back its capital costs. He demonstrates how  the  reopened railway could easily have improved on the poor journey times between Huntingdon and Addenbrooke's the busway offers. He wonders why the busway was extended to Addenbrooke's when there were already 16 buses an hour between Cambridge rail station and the hospital.

Another letter on the same page by William Gibson of Huntingdon says that the busway usage of over a million people show that it is a success and that the railway would have been vulnerable to 10% fare increases, leaves on the line, the wrong kind of snow plus eye-watering car parking charges.
Posted by Andrew Bethune at 16:52 No comments:

The proposed enterprise zone for Alconbury airfield, promising 5000 new houses and 8000 jobs, says this week's Hunts Post (18 January, page 2). The developers of Alconbury are Urban & Civic, who are hoping also to open a railway station at Alconbury. The article does not give any details of how the Alconbury stretch of the busway would link with the St Ives-Cambridge section.
Posted by Andrew Bethune at 16:37 No comments:

This week's Huntingdon & St Ives News & Crier (19 January, page 3) reports on the millionth passenger on the busway - Christine Chandler from Colne who was travelling from St Ives Park & Ride to Addenbrooke's with her father.

Elsewhere in the same issue (pages 12-13) Andy Campbell of Stagecoach reports that usage of the route has more than doubled (50,000 a week) compared with the old 15, 45 and 55 routes pre-busway (24,000 a week). Many of these journeys are being made by new bus users, people who would otherwise have driven to Cambridge via the A14. Cllr Steve Criswell says the county council is now wanting to increase the park & ride capacity, and hopes that the busway will eventually attract 3.5 million passengers per year.
Posted by Andrew Bethune at 16:27 No comments:

This will be used by Cambridge-bound busway services, and by reducing pressure on St Ives Bus Station, will make it possible for Service A buses to terminate at St Ives Bus Station. At present most service A buses run to/from the Park & Ride and do not serve the bus station. Many passengers (including me) have to walk the quarter mile from the Park & Ride to the town centre.

Hopefully, the extended bus route will cut down on the number of pedestrians crossing Harrison Way and so minimise delays to motorists on the A1096. The change will also stop Cambridge-bound buses from having to loop around the bus station. This will cut 2 minutes from the journey time. Cambridgeshire County Council cabinet meets on 17 January and is expected to recommend the project to the Council.
Posted by Andrew Bethune at 20:58 No comments:

According to today's Hunts Post ( 4 January, page 2) the busway will soon have carried its millionth passenger. Andy Campbell of Stagecoach expects they'll reach 2.5 million passengers in the first year, and so they have ordered some new buses. However, they haven't yet decide on the shape of future bus services.

The article also refers to a survey conduced by Pure Resourcing Solutions suggesting that the busway has opened up new job opportunities. Two thirds of those questioned would now consider travelling further to work. Only a quarter used the busway instead of their existing travel method, though 42% said they would in future.

On page 6 of the same issue is a letter from Tim Phillips, chairman of CAST.IRON, the organisation that campaigned for the St Ives railway to be reinstated as a railway, not a busway. He writes in response to a letter (Hunts Post, 21 December) complaining that the Huntingdon to Addenbrooke's bus journey is now slower than before the busway opened. Factors contributing to this sad state of affairs are
To those delay factors, I'd also add that the Cambridge-Huntingdon buses now make a lot of extra stops at intermediate villages, which slows them down compared with the old non-stop route along the A14.
Posted by Andrew Bethune at 09:55 No comments:

Writing in the Hunts Post ( 28 December, page 6) Bob Burn-Murdoch discusses the beneficial effect of the busway on Huntingdonshire generally, and especially St Ives. For months after the busway opened 'St Ives was thronged with crowds of people from the big city'. It's our big chance, he says - we offer a range of shops in a town centre visitors can walk through in a few minutes. Bob also notes that Cambridge has more visitors that it knows what to do with, but now some of them can be directed to St Ives via the busway. Hopefully they will discover, not just St Ives and its excellent museum of which Bob is the curator, but also Huntingdonshire's other historic towns and villages.
Posted by Andrew Bethune at 17:18 No comments:

Today (the New Year Bank Holiday)  a Sunday service has been running on the busway. However, the electronic notice board at St Ives Park & Ride was showing a normal weekday service including buses on service A to Trumpington. I noticed that live bus times were not showing either. Electronic information systems are only as good as the people who input the data. Somebody at the County Council's busway department has slipped up here, I reckon. 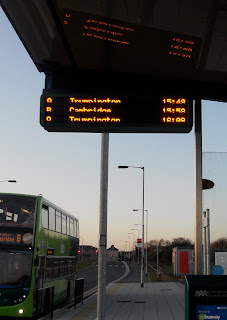 Posted by Andrew Bethune at 17:00 No comments: