Those of us who use the guided busway are painfully aware of the delays cause by traffic conditions on the ordinary roads - mainly in central Cambridge, but also at times in St Ives.

Today, the Cambridge News has published an article about a £190 million scheme to explore  'innovative sub-surface solutions' to Cambridge's traffic problems.  This is a revival of an idea, first proposed in 2008, to build a network of tunnels under the city centre from Castle Hill to Coldham's Common. There would be underground bus stations a below Christ's Pieces and the Grafton Centre and possibly a link to the Railway Station.

It is reckoned that traffic delays cost businesses in Cambridge £1 billion a year.

The tunnel scheme is one possibility for trying to sort out Cambridge's transport problems  and Cambridgeshire County Council and Cambridge City Council are putting in a bid to the Government for funding.

Stagecoach have announced that they are withdrawing their service 20 between Fenstanton and St Ives Park & Ride as from February 10.

I imagine this route was put on in the hope of attracting Fenstanton residents onto the busway service. Occasionally when passing through St Ives Park and Ride on the bus, I have seen the service 20. I don't think I have ever seen anyone boarding or alighting. In fact, sometime the 20 has arrived just as an A or B heads off to Cambridge, or leaves the Park & Ride as an A or B comes in. So the 20 hasn't really been providing an adequate connection to Fenstanton.  In addition, it probably cannot compete on time or price with the Whippet services 1A and 5 which run through Fenstanton.

The Hunts Post ( 30 January, page 6) has two letters about flooding. Although neither mentions the busway directly, both examples of the flooding described affect busway users.

The floods at Earith cause congestion in St Ives as drivers seek alternative routes to Cambridge and other destinations, and there is a knock-on effect on guided buses trying to pass through St Ives. The flooding in Low Road, Fenstanton, affects cyclists who have to divert off the busway due to flooding between St Ives and Swavesey.

Solutions discussed in the letters are: raising the level of the A1123 at Earith, raising the level of Low Road, dredging the Hundred Foot river to increase flow, and ensuring that the drain flaps in Low Road are working correctly.
Posted by Andrew Bethune at 11:41 1 comment:

Snow melt has raised the level of the River Great Ouse, and this morning (28 January) the cycle track is under water on both sides of the Ouse Viaduct. So it's not possible to cycle between St Ives Park & Ride and Fen Drayton Lakes. The cycle track is still dry between Fen Drayton and Swavesey (on 28 January).

Update - 29 January - Here are some photos showing the water pouring into the Far Fen Lake (that's the first pond on the right after Fen Drayton Lakes bus stop as you head towards Cambridge). The water comes in from the Ferry Lagoon ( the big pond on the left just east of Fen Drayton bus stop) which in turn must be fed from the river. There are a couple of small bridges under the busway which allow this flow to happen. Presumably, their small flow capacity  explains why the Fen Drayton to Swavesey section stays flooded once the river level drops.


For a map showing names of the ponds at Fen Drayton Lakes click here.
Posted by Andrew Bethune at 12:53 13 comments:

There is a very useful and informative analysis of the busway debt in this week's Huntingdon & St Ives News & Crier (24 January, page 6). It's a letter written by a Fenstanton resident ( Trevor Lee) who attended a public meeting about the finances of the busway construction that was held in Impington on 29 November.

In answer to a question at that meeting he was told that the excess of £64m paid by the Council to BAM Nuttall was due to 'interim payments being made to the contractor based on their costs plus a percentage for overheads and profit that was in accordance with  the form of contract being used'.

Later Mr Lee discovered that the contract used conformed to New Engineering Contract (NEC) Option 'C' which is used when 'the extent of the works cannot be fully defined and anticipated risks are greater'. The contractor submits 'target prices for work based on estimated costs plus a percentage for overheads and profit'. The contractor is paid in instalments, and at the end there is a final adjustment which can go either way depending on how the project costs have worked out in detail.

In the case of the busway, Cambridgeshire County Council believes it is owed £64 by BAM Nuttall, which BAM Nuttall disputes. Interest is now accruing on that £64m.

Mr Lee believes that the risk to council taxpayers would have been less if Cambridgeshire County Council had used a different form of contract, the NEC Option 'A' by which the contractor has to submit firm prices for each stage of the work.  Under this scenario, it is possible that BAM Nuttall might have submitted higher estimates for the work, but the County Council would have known what they were getting for their money, and would not have ended up in this dispute.

Finally Mr Lee suggest that the Council made an 'erroneous decision'  with regard to the style of contract and should be brought to account.

The letter can be viewed by going to the online version of the paper here.

Posted by Andrew Bethune at 08:32 No comments: 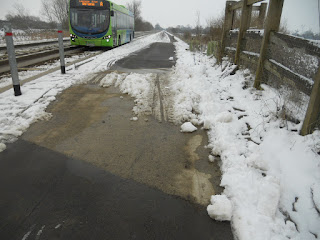 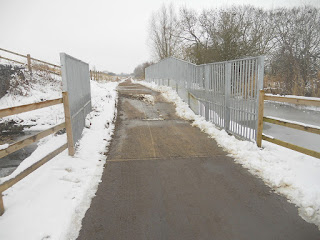 Cars and other incidents on busway

From time to time the local newspapers report incidents on the busway, for example, when motorist drive onto the busway and get stuck.

In fact, there have been more than 56 incidents in the past 6 months, including 20 cars being driven onto the tracks. 18 of these were at the busway crossing of Harrison Way in St Ives. There have been fires, obstructions, signal failures and bus breakdowns.

This week's Huntingdon & St Ives News & Crier  ( 17 January, pages 1 and 10) carries an article about the  debt of £64.2m which Cambridgeshire County Council has incurred as a result of what the newspaper calls 'spiralling costs' of the busway. Over 5 years interest payment have totalled £6m so far. Meanwhile the Council has had to cut back on services such as bus subsidies, libraries and youth services. The Council hopes to recoup these losses next year when its court case  against the busway contractor, BAM Nuttall, is heard. The Council hopes to win the court case.

See also  Cambridge News website for details of this story.

Posted by Andrew Bethune at 10:54 No comments:

Water was still lying on the cycle track near Swavesey yesterday ( 9 January) and this photo shows a cyclist carrying his bike along the grassy strip next to the bus track. 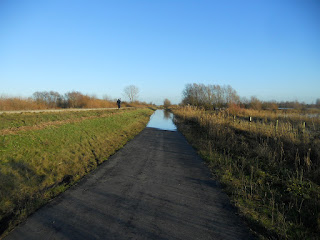 Another view of the same spot with an A bus approaching. You can see the tyre tracks climbing the grassy bank where cyclists have had to avoid the water. 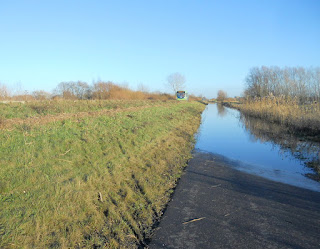 At the concrete bridge, the water level has now gone right down and the cycle track is dry, but there are still mounds of debris. The passage of many feet and cycle tyres has created a narrow pathway, clear of debris, through over the bridge. 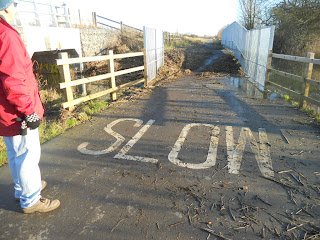 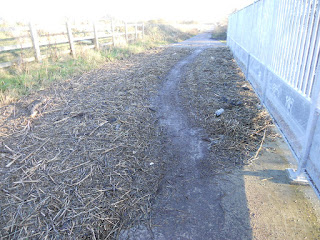 Diversion to busway service B

Due to essential repairs to a collapsed sewer in Jesus Lane, Cambridge, busway service B  is being diverted and will not serve the bus stops at Round Church Street and Jesus Lane. These stops will be out of use  from 7 January for 10 weeks. Passengers are advised to use either Castle Street or New Square bus stops instead.

Details of the diversion can be found here.

Other bus routes affected are Citi 1, 2, 5, and 6,  Red Park & Ride and Stagecoach X8 and some Whippet services.
Posted by Andrew Bethune at 08:18 No comments:

Here are a few photos I took this morning ( 4 January) to show the dire state of the cycle track between St Ives and Swavesey.

This is the approach to the small concrete bridge from the St Ives direction. Water is still lying on the cycleway, maybe 2-3 inches deep, so it is possible to cycle through, but you are then faced with the thick layer of debris covering the concrete bridge. 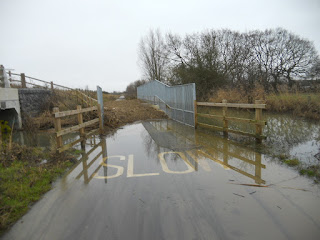 Looking back towards St Ives from the concrete bridge, showing both the debris and the flooded section. 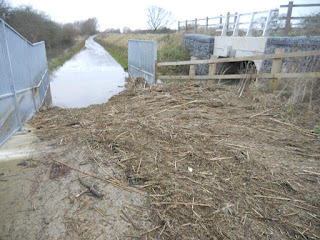 A close-up of the debris on the concrete bridge -  about 5-6 inches deep in places. 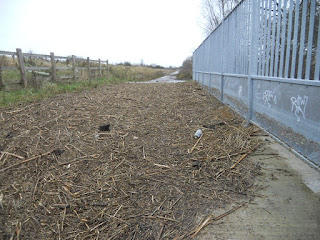 A short distance east of the concrete bridge is the enormous tree trunk, mentioned by Kevin in a comment to this blog a few days ago, deposited by the flood water. On this photo you can see the tide mark indicating how deep the water was, and how much the level of the cycle track needs to be raised in order to ensure  it can be used all year round. 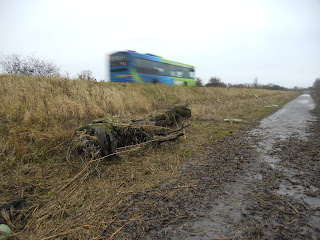 Near the Fen Drayton bus stop. 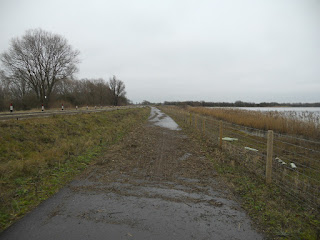 And finally, the still-flooded section between Fen Drayton and Swavesey. The tide mark is clearly visible showing that the water has already dropped by about a metre. I did not venture into the water to test the depth. 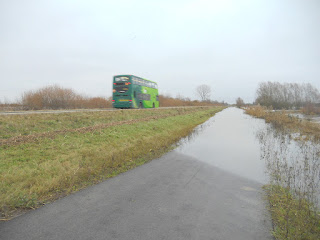 A few weeks ago it was announced that Cambridgeshire County Council was to spend £95,000 on installing solar powered lights on the busway.

A letter in this week's Huntingdon & St Ives News & Crier ( 3 January, page 6) calls on the County Council (and Councillor Ian Bates in particular) to make the St Ives end of the cycle track usable before 'the section nearest Cambridge was given gold-plated treatment'. The writer, from Godmanchester, is referring to the fact that the cycle track  between St Ives and Swavesey has been under water for the past 4 weeks.

The letter also refers to a comment by Nigel Brigham of Sustrans about wanting people to 'still feel able to ride their bikes for their everyday journeys' - which they can't do while the track is flooded.
Posted by Andrew Bethune at 22:35 2 comments: