The Hunts Post reveals that Andy Campbell of Stagecoach wants to run Service A right through the centre of St Ives via Market Hill and Hill Rise. Market traders fear that his will displace up to a third of market stalls from their regular places. Mr Campbell has been invited to the next meeting of St Ives Town Council (14 March). Mr Campbell's view is that re-routing buses through central St Ives would improve the service by preventing them getting stuck in the St Ives one way system at peak times.
Hunts Post (29 February, page 13)
Posted by Andrew Bethune at 21:14 No comments:

This week's Hunts Post has three letters about the delays caused by the conflict between cars and buses at traffic lights where the busway crosses over Harrison Way, St Ives. Fears are expressed that when the Service A buses are extended to run in and out of St Ives, the number of interruptions to traffic will increase. However, the extra buses should mean that fewer pedestrians will be using the crossing crossing, so the number of red lights may actually drop.
Hunts Post (29 February, page7)
Posted by Andrew Bethune at 21:09 No comments:

Huntingdon & St Ives News & Crier has revealed that, in July, Stagecoach will acquire eight new buses enabling them to increase services to every 7 or 8 minutes (or eight buses an hour instead of the present six).

Once the new bus stop in Station Road, St Ives, is built, services can be extended into St Ives Town centre.

http://www.cambridge-news.co.uk/Huntingdon-St-Ives-St-Neots/Busway-services-to-grow-21022012.htm
Posted by Andrew Bethune at 15:10 No comments:

Approval has been given to build a new railway station  in north Cambridge near the Science Park at a cost of £26 million. See http://www.cambstimes.co.uk/news/mp_welcomes_26_million_rail_station_that_he_says_will_boost_east_cambs_and_fenland_1_1215678
The site is just north of where the St Ives railway joined the  main line and will presumably be connected to the guided busway. It is expected that over 3000 passengers a day will use the station.
Posted by Andrew Bethune at 16:46 No comments:

The Hunts Post picks this theme up ( 15 February, page 5). A survey was carried out on behalf of St Ives Town Council. On 25 January, between 7 and 9 am , 2200 cars passed along Harrison Road, while the traffic lights went to red 64 times - that's 23 minutes in total. Councillor Colin Saunderson carried out his own informal survey on 16 January and reposted that the majority of crossings were made by pedestrians. His solution is to penalise the pedestrian - make us wait longer.

Another solution  (not mentioned in the newspaper report) would be to run all service A buses to/from St Ives Bus Station and that way cut down on the number of pedestrians crossing Harrison Way.

On a personal note, for my morning commute I can catch the A from the Bus Station, so walking across Harrison Way to the Park & Ride is unnecessary. On my evening commute, however, the A terminates the  Park & Ride, so, unless a B happens to be coming along just then (it doesn't usually), I have to walk the last quarter mile into town. There can often be about 10 other passengers making the same walk, and that often results in not one change of the lights , but two or three, as people don't all alight from the bus at the same moment, and they then walk to the pedestrian crossing at different speeds.

The planners need to put themselves in the mindset, not just of motorists, but of people like me who use the buses.
Posted by Andrew Bethune at 07:16 No comments:

Newspaper reaction to the snow

The big snowfall ( Saturday 4/ Sunday 5) was slightly too late for full coverage in the local papers that week.

This week's News & Crier ( 16 February, page 4) says that cyclists are angry over snow on the busway cycle trcak. The Multihog, on which Cambridgeshire County Council spent £75,000 cannot be used  with its snowplough attachment on some stretches of the guided busway because the track is too narrow - there is no space to push the snow put of the way.  A council spokesman, Shaun Harrison-Fuller, says the council will do all it can to ensure that the cycle track is kept clear. It's also noted that the bus tracks are treated by a 'guided gritter'. Mr Harrison-Fuller said there was no operational reason for Whippet cancelling their service on Sunday 5th.

A letter for me about the busway conditions appears in the Hunts Post ( February 15, page 7). It details the conditions on the track on 5 February, including the apparent lack of effective gritting or snow ploughing, the dangerous conditions on the Orchard Park unguided section of busway and the failure of Whippet to run a service.
Posted by Andrew Bethune at 07:01 No comments:

More snow on the busway

There was another fall of snow last night (Monday) - approximately 2 cm.

I travelled to Cambridge on the 07.32 service A from St Ives Bus Station (Tuesday morning). I could see no sign that the busway had been gritted, but the tracks were clear  - probably as a result of early buses having travelled the route.

At St Ives and Longstanton Park & Rides, the busway opens out to quite a wide roadway. At these places the tyre tracks fan out, and between the tyre tracks there was still snow lying on the ground.

The only evidence I could see for the service vehicle having been out was near Oakington where there is a partly completed junction for a planned road into the yet-to-be-built new town of Northstowe. Here tyre tracks showed that a vehicle had pulled off the track, possibly to let a service bus past.

At the Science Park stop, there was a small truck on the footpath, and a team of two men were clering snow from the bus stop platform and footpaths giving access to the bus stop.
Posted by Andrew Bethune at 08:40 No comments:

Busway in the snow

Yesterday evening on my way home from work, I noticed that the busway maintenance vehicle was running, presumably spraying salt water on the tracks to prevent  ice build up.

About 4 inches of snow fell in St Ives late evening and during the night.

I caught the 09.40 Service B from St Ives Bus Station to Cambridge. Here is a picture showing a Whippet bus arriving at the bus station presumably to start the journey to Cambridge. 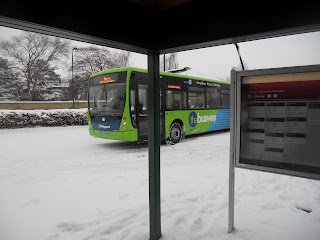 The service B left on time, and here is a view approaching St Ives Park & Ride showing the Whippet bus turning back. 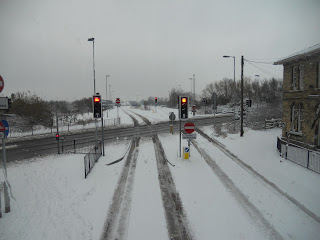 Later, I received an 'adverse weather update' email from Stagecoach which said that:


Stagecoach route B is operating but may be subject to delay due to the adverse weather conditions.
Whippets route C is not operating today (Sunday 5th February 2012).

Whippet's service 1A via Bar Hill was running. It left St Ives ahead of the B and coincided with the B at the Shire Hall. 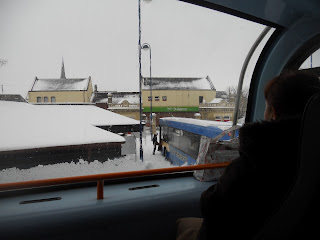 How did the busway perform with snow on the tracks?
The tracks were still covered with snow, and there was no evidence that the salting vehicle had been out this morning. There had been no snow plough either. My bus ran quite slowly on the busway, possibly no more than 20mph. Arrival in Cambridge was 10.32 - about 16 minutes late.
This view is between Swavesey and Longstanton, with a bus approaching in the opposite direction. 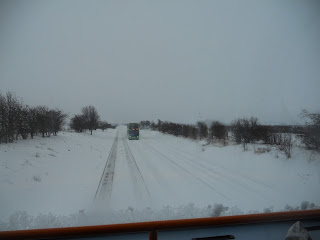 Track conditions on the section through Orchard Park, where the buses run on narrow concrete tracks with no guides were appalling. At one point the bus skidded violently, and it appeared that it was not actually keeping to the concrete. How could they, when the concrete was covered with now?
These images illustrate the treacherous conditions at Orchard Park on the return journey (13.20 from Drummer Street). 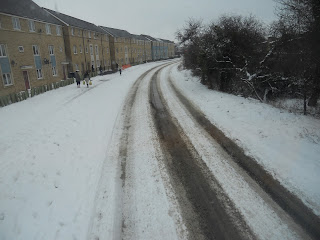 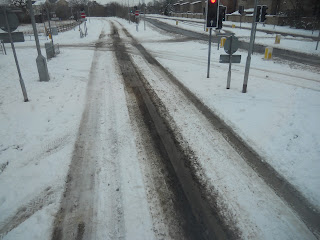 Conditions on the track on the return were much better. Passage of several buses had helped the snow to melt and the bus was able to run at normal speed. We alighted at Fen Drayton on time, and walked back to St Ives from there.
The salting vehicle was running. Here it is travelling eastbound near Longstanton.

Does the busway have a snow plough?  In November it was announced that a Multihog had been purchase to deal with snow on the busway. See http://www.huntspost.co.uk/news/latest-news/guided_busway_snowplough_unveiled_1_1128427

And what  arrangements are in place to get the track cleared early in the morning before the buses start to run?
This is the busway's first experience of snow. It coped, but the absence of effective de-snowing equipment was a problem.
If Stagecoach could run the Service B, why did Whippet not run its Service C?

Update - The Hunts Post (8 February, page 3)  carried a brief article about the effect of snow on the busway. Whippet abandoned their service after the first bus along the track experienced problems with compacted snow,  and slipping. Stagecoach decide to keep going for the sake of their customers.
Posted by Andrew Bethune at 16:48 No comments:

A letter in this week's Hunts Post (1 February, page 6) draws attention to increasing numbers of motorists illegally using the St Ives Town Bridge as a rat run to avoid congestion on Harrison way caused by the busway traffic lights.

This proposal, mentioned in an early blog post, is about installing a new bus stop outside Hyperion auction house. How exactly this will be achieved, the council has not yet revealed, but it seems to me that it must involve felling a number of trees,  widening the pavement, and narrowing the carriageway. Although Cambridge-bound busway buses will be able to avoid looping back into the bus station, all other buses arriving at the bus station will still have to turn that corner. So, while it might speed up some busway services, it may cause extra delays to other buses, and general motor traffic in Station Road.

A better solution surely would be to create extra bus bays on the north side of the bus station to allow busway service to Cambridge to avoid the loop.

St Ives Bus Station is too small for the number of buses currently using it. Perhaps some services currently terminating at the Bus Station could be extended to terminate at the Park & Ride, where there is plenty of space. They might have to take out the short sections of busway on either side of the Harrison Road light and put in rising bollards.

A second letter on page 6 refers to the Harrison Way lights causing tailbacks through central St Ives which in turn are causing busway services arriving in from Huntingdon and Ramsey Road to be delayed.

Elsewhere in this issue ( Hunts Post, 1 February, page 29) there is an article about the proposed development of 700 new house at Bear's Croft Farm on the outskirts of Godmanchester. It is well known that Godmanchester has a poor bus service, especially in the Cambridge direction. The developers, Fairfield Partnership, have annouced plans to improve the bus service in order to minimise congestion on the A14. They want 4 buses an hour at peak, and 3 at off peak to link Godmanchester with Huntingdon, plus 3 an hour at peak and 2 an hour off peak from Godmanchester to St Ives and the busway via Hemingford Grey. How these two proposed services, with conflicting frequencies, will work, is not clear to me.

A big drawback is that these services will have to traverse a short section of the A14 to get from Godmanchester to Hemingford Grey, and will therefore be subject to the usual delays when the A14 is blocked. Knowing that the Whippet route 1A/5 that currently runs via the A14 is just as quick as the busway services ( most of the time), does beg the question of how a Godmanchester to Cambridge via St Ives and the busway route could be fast and reliable enough to attract the Godmanchester commuter traffic. I know one person who commutes from Godmanchester to Cambridge who find that the best way is to drive to Madingley Park & Ride and bus from there.
Posted by Andrew Bethune at 12:49 No comments: