Jane Bowd, of the St Ives Town Initiative, has said that a new guide to St Ives is needed. This is because the busway is bringing extra visitors to the town. The guide will be produced in conjunction with St Ives Town Council, and Bob Burn Murdoch, curator of the town's Norris Museum will be involved in the project.
Posted by Andrew Bethune at 08:46 No comments:

The outstanding dispute between Cambridgeshire County Council and the construction company which built the busway, BAM Nuttall, will now go to court in January 2014. This has been decided by a judge at London's Construction and Technology Court, according to a recent report in the Huntingdon & St Ives News & Crier (April 12, page 3).
Posted by Andrew Bethune at 08:38 No comments:

Changes to bus routes A and B in July

Stagecoach has announced its proposal for reorganising bus routes A and B in St Ives as from July, following introduction of some new vehicles. In order to provide a quicker journey to/from Huntingdon, the service B will be re-routed to miss out the top end of Ramsay Road and Hill Rise. Service A will be extended to Hill Rise, but will do a one-way loop by turning left at the Seven Wives, then right into Hill Rise then back into St Ives down Ramsey Road. This will mean that residents of the Hill Rise area won't have a direct bus to Huntingdon. Instead they will have to walk down to the Seven Wives, or catch the A to Seven Wives and change onto the B. (Hunts Post, 25 April, page 15)
Posted by Andrew Bethune at 01:21 11 comments: 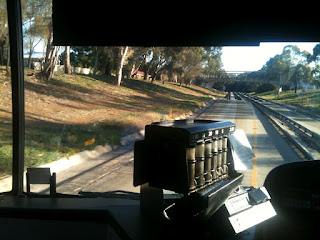 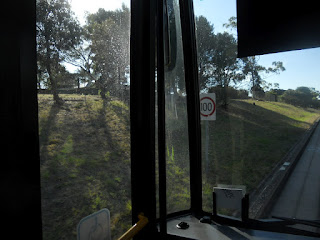 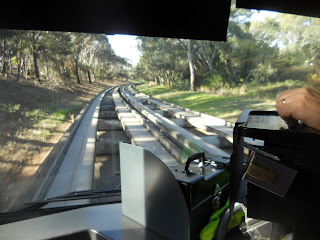 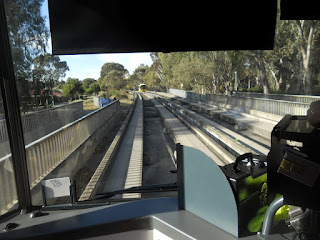 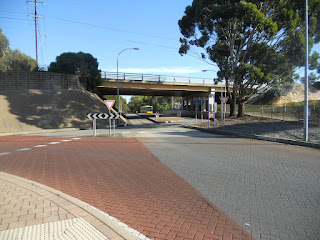 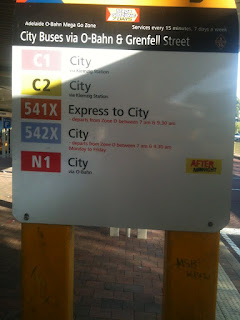 Earlier posts have mentioned the proposed new bus stop in Station Road, St Ives, that would allow more busway services to continue to St Ives Bus Station instead of terminating at the Park & Ride. The advantage of this would be to reduce the number of pedestrians crossing Harrison Way and delaying motorists, particularly at peak times. If you know Station Road, you will realise that there really isn't enough space to locate a bus stop there. Outside the auction house might be an option, but several mature trees would have to be felled. Between there and Waitrose there are several side turnings to/from the bus station, the Girl Guide building and the car park. The Hunts Post (11 April, page 14) reports thconcerns that a stop in this position might increase the risk of road accidents. A county council road safety report about the proposed stop suggests moving and redesigning it.
Posted by Andrew Bethune at 09:12 No comments:

While buses on the busway regularly travel the St Ives-Milton Road section in 20-22 minutes, punctuality of buses has always been affected by road conditions elsewhere. On Thursday 5 April an accident,took place on Milton Road, Cambridge about 2.49pm forcing busway routes A and C to be diverted via Victoria Road, Histon Road and Kings Hedges Road. I travelled home from work on the 16.59 Service A, boarding at Parkside. Fortunately traffic levels were light, and the notoriously slow and congested junction at Victora Road/Histon Road was flowing smoothly. My bus reached St Ives about 10 minutes late. The diversion route ran parallel to the Orchard Park (un)guided busway, and it was noticeable that we covered that section much faster than the regular Service B which is slowed down by the lack of guide kerbs and by numerous crossings and traffic lights. Passing the back of eth CRC stop, I noticed a number of passengers waiting who usually travel on the same bus I do. By the time my Stagecoach bus had reached CRC, these people were no longer on the platform. They had been picked up by the Whippet C running just ahead of my bus - so some evidence perhaps of the two rival bus companies co-operating unofficially. A report of the unfortunate accident which caused these delays can be seen at here.
Posted by Andrew Bethune at 09:26 No comments:

Warning marks have recently been painted on the busway's cycle track at several places, to help cyclists to avoid hazards such as bollards. 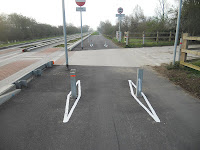 At Histon, there is a footpath which crosses the busway. They've painted white lines to try and direct cyclists away from the busway at the crossing. 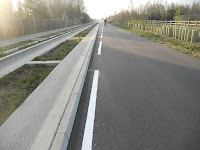 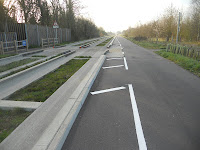 Only one letter about the guided busway in last week's Hunts Post (28 March, page7). It concerns the proposal to run buses through Market Hill to the Broadway, this avoiding the traffic congestion in the Cromwell Place/Quadrant gyratory system. The writer reckons that only 5 market stalls would be affected, and that far from the buses causing loss of shops, notes that St Ives shops have already noticed an increase of trade due to the busway. A bus stop in The Broadway might boost the shops at that end of the town. The Meadow Lane roundabout is causing traffic jams back into the town centre - taking bus traffic away from that route can only be a benefit. No doubt the discussion will continue.
Posted by Andrew Bethune at 21:21 No comments: