Yesterday I was given a 'Bus Passenger Survey' form during my morning jurney to work.

As luck would have it, the journey about which I filled in the survey form, was running about 12 minutes late, and was grossly overcrowded. So some of my responses leaned towards the 'not very satisfied' end of the spectrum.

This is clearly a different survey from the one Stagecoach were recently conducting as regards the morning peak hour overcrowding.

Has anyone else been offered a Passengerfocus survey form?
Posted by Andrew Bethune at 09:19 2 comments:

Whippet will be changing their busway timetable as from 1 October. You can see the new  timetable  here.
Posted by Andrew Bethune at 13:46 5 comments:

A proposal has been made to provide solar lighting for cyclists and walkers on the southern section of the guided busway between Cambrdige Station and Trumpington. See Cambridge News website.
Posted by Andrew Bethune at 11:45 No comments:

The bus stop structure now appears to be complete and a timetable poster has been placed in the notice board at the stop. The lights seem to be working. However, the real time bus display is not functioning yet. 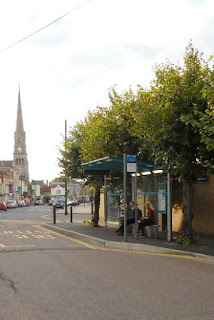 Posted by Andrew Bethune at 21:58 No comments:

Work is again in progress on providing (I guess) a proper shelter at the Station Road bus stop (12 September). 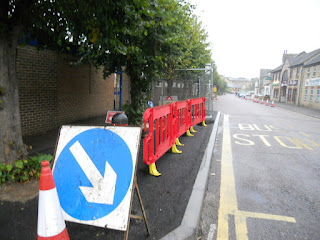 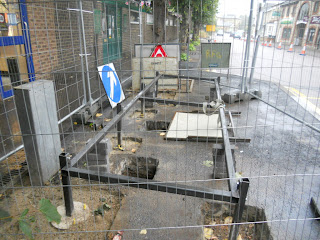 There is a temporary stop, with no timetable information, further along the road. 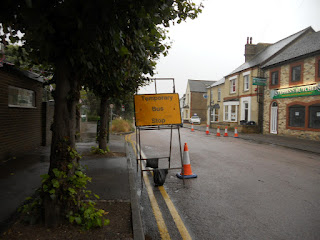 Next day (13 September). The frame of the bus stop is in place, including a bench. The bus stop lights are working, but as yet no roof or ticket machine. 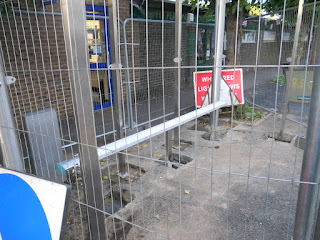 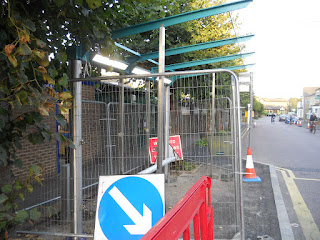 On 3 September, a motorist, who failed to see the road signs, drove into the car trap  at St Ives. She claims that a double decker bus obscured the signs, though Cambridgeshire County Council says that the signs are 'ample'. The person driving the recovery vehicle says he has about two call-outs a week to the car trap. ( Hunts Post, 12 September, page 15)
Posted by Andrew Bethune at 09:40 7 comments:

It seems absurd that Stagecoach's route B does not stop at Houghton, a sizeable village of perhaps 2000-3000 people. The Hunts Post ( 12 September, page 15) reaveals that Stagecoach would call at Houghton if a bus stop could be provided on the main road (A1123). Cambridgeshire County Council says a bus stop would cost £50,000 and it seems also there are design problems about where to site the stop. Yet, a mile along the road, buses call at the stop beside the Marina where there is no layby and scarcely even a bit of pavement from people to wait on. I also wonder why there is no bus stop at Huntingdon Garden and Leisure, which must surely be a magnet for passengers.
Posted by Andrew Bethune at 09:35 No comments:

This week's Hunts Post (12 September, pages 6 and 7) prints two letters about the problems of the new bus stop in Station Road, St Ives. How absurd it is that old and vulnerable people waiting for buses to hospital have to wait on a busy pavemnt in eth open when there is a waiting room only yards away in the bus station! Buses waiting at the stop are lilkely to impede emergency vehicles, and block sightlines which make crossing roads nearby dangerous  for pedestrians. There is a suggestion that parking should be restricted in Station Road, and the exit from the Waitrose car park into Station Road be closed.
Posted by Andrew Bethune at 09:24 No comments:

A letter in this week's Hunts Post (5 September, page 6) from a Houghton resident describes an incident at Drummer Street Bus Station when a Stagecoach bus driver watched a passenger run for the bus, and drove off when the  passenger was within about three paces of the bus door. Two other Stagecoach drivers who saw the incident simply shrugged their shoulders.
Posted by Andrew Bethune at 22:08 No comments:

Since the school term started on Tuesday, the bus I travel to work on has been grossly overcrowded every day. This is the 0720 A from Wyton Camp, which I board at Station Road, St Ives.  Passengers have had to stand from St Ives Park & Ride. On Tuesday and today (Thursday), there were so many people standing in the aisle (well over 20), that no-one could be picked up at Lonstanton, Oakington and Histon. The new timetable may inded be providing extra seating capacity during the middle of the day, but it seems that around 0730 the existing timetable cannot cope with the demand. 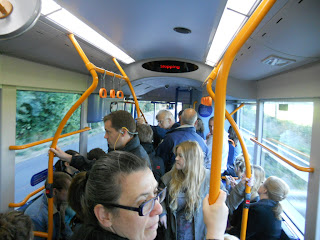 Have other journeys been affected by overcrowding?
Posted by Andrew Bethune at 14:58 42 comments:

Today's Hunts Post ( 5 September) includes three letters about the Station Road bus stop in St Ives, including one from a Fenstanton resident who has been in correspondence with the County Council about the problems. The letter is well worth reading as it reveals quite a bit about the process that resulted in this very  inadequate response to perceived overcrowding in St Ives Bus Station. This is on page 6.

Pressure on St Ives Bus Station is evidently reducing, as instanced by an article elsewhere in the paper (page 11). This covers withdrawal of an early morning bus  (service 21) that was used by young people from Needingworth travelling to St Ivo School. Stagecoach lost the school transport contract for Pidley, Somersham, Colne, Bluntisham and Earith to Whippet and Dew's, which has rendered that particular journey uneconomic. Needingworth pupils live less than 3 miles from the Ivo and are therefore not entitled to free travel to school. Whippet and Dew's buses currently have only 13 places available, at a cost of £150 per term, for pupils from Needingworth to use.

On page 7 are two letters grouped together under the heading of  'The sorry tale of two market towns' i.e. Huntingdon and St Ives. There is clearly a perception that St Ives has better shopping facilities than Huntingdon, but  the owners of an independent St Ives shop refer to their declining  trade. Although it has  been suggested that the busway has brought trade into St Ives, these shop owners would dispute that.
Posted by Andrew Bethune at 09:22 2 comments:

This week's Hunts Post (29 August) didn't drop through my letter box until Friday, and although I had looked at the online version earlier in the week, I  missed a short letter from a St Ives resident that was on page 7. It was about the chaos in Station Road, St Ives, on market day ( Monday 20 August) due to a bus picking up passengers at the new bus stop, with cars queued behind it, and a bus coming the other way, from the Cambridge direction. The letter writer thinks that whoever decided on the site of the new bus stop hadn't 'given the idea much thought'.

I wasn't in St Ives the following Monday (26 August) for the Bank Holiday market. Did any readers of this blog  see how the new bus stop performed, whether the bus station was taken over by market stalls, and whether buses had to be diverted?

Posted by Andrew Bethune at 18:45 No comments: