Work to create a  road/cycleway link between the guided busway and the new Cambridge Science Park railway station is stepping up.

The cycle/pedestrian underpass under the old railway in Milton Road will close - cyclists and pedestrians will be diverted to the other side of Milton Road. Motor traffic will continue on Milton Road throughout the operation in both directions, but traffic may be diverted onto a bus only lane. This phase of the work will be completed in March 2015.

The station is expected to open in May 2016.

Posted by Andrew Bethune at 18:55 No comments:

Yesterday's Times (19 July, page 32) carried an article analysing the effect of Park & Ride schemes on people's driving habits. In general, it seems, people drive longer distances to use a P&R than they might have done otherwise. So P&Rs are maybe not as green as all that. Of course, P&Rs are designed to prevent people taking their cars into congested city centres - but there is clearly a cost in terms of driving distances. This is according to the work of Prof Graham Parkhurst of the University of the West of England.

However, Prof Parkhurst praises the Cambridgeshire Guided Busway , since it manages to intercept car trips early in their journey.

You can read the article online here if you have an online subscription to The Times.
Posted by Andrew Bethune at 14:22 No comments:

The Cambridge News has used FoI requests to obtain a breakdown of what it describes as "emergencies" on the Busway in the past 18 months. There were 38 of them. Follow this link for the full story, including a slideshow of 10 photos of such incidents (all but one of the photos are of vehicle incursions - presumably because broken traffic lights aren't especially photogenic).

Opinions seem to differ as to whether poor signage might be partly responsible for the vehicle incursions. Cllr Mason, on past evidence no great friend of the Busway, would like to see prosecutions to back up earlier threats.
Posted by Hugh Taylor at 08:49 No comments:

I tried - and failed - to come up with a more interesting title for this posting. Honest.

According to the Cambridge News, Histon PCSO Tony Martin has been energetically addressing illegal and anti-social activity in the vicinity of the Busway. Just today there was a report of him engaged in a Hunt for 'unsavoury characters' around the Buway. And this report comes close on the heels of news that PCSO Martin was also the subject of One man's bid to snare illegal riders on guided busway. As this earlier story also makes clear, he has also held a cycle security surgery to try to reduce the number of bike thefts at Busway stops.

Hard to fault his enthusiasm. But what this says about the good folk of Histon - or a small proportion of them, at least - well, that's a different story...
Posted by Hugh Taylor at 15:13 No comments:

Just a month ago, I posted an entry about proposals to light the southern section of the Busway. I said then that the plans were very much on track. What a difference a month makes!

Yesterday's meeting of the County Council's Economy and Environment Committee considered the proposal. Actually, the proposal covered both the northern and southern city sections. I can't easily summarise the details, but will instead provide a link to the relevant agenda item, and the council officer's report. The key issue, though, is that instead of the £100,000 provisionally set aside in December 2012 for the southern section, detailed costings have come in at £400,000 [sic]. Council officers made clear, though, that there was enough unspent money from the pot of "developer contributions" (the levy that larger developments have to contribute to general infrastructure - NB, that's only my personal definition!) to meet the additional cost.

We'll know exactly what happened at the meeting when the official minutes are posted on the County Council website. But there's no reason to doubt the veracity of the Cambridge News report. Here's a taste:

Cllr Amanda Taylor, who represents Queen Edith’s, said it would improve safety and encourage more people to use the track, but councillors from outside the city expressed misgivings about allocating this much money when streetlamps in their areas were being removed or dimmed.

This prompted Petersfield’s Cllr Ashley Walsh to attack what he described as “petty-minded parochialism”, but Roman Bank and Peckover’s Cllr Alan Lay recalled blackouts during the Second World War and questioned why there was now “a lot of fuss saying we must have lights”.

Something to keep in mind next time you're cycling in the dark along the southern section.
Posted by Hugh Taylor at 18:16 3 comments:

Work is in progress clearing the former railway track between Milton Road and Chesterton Junction. As the following photos show, there are piles of old railway sleepers. 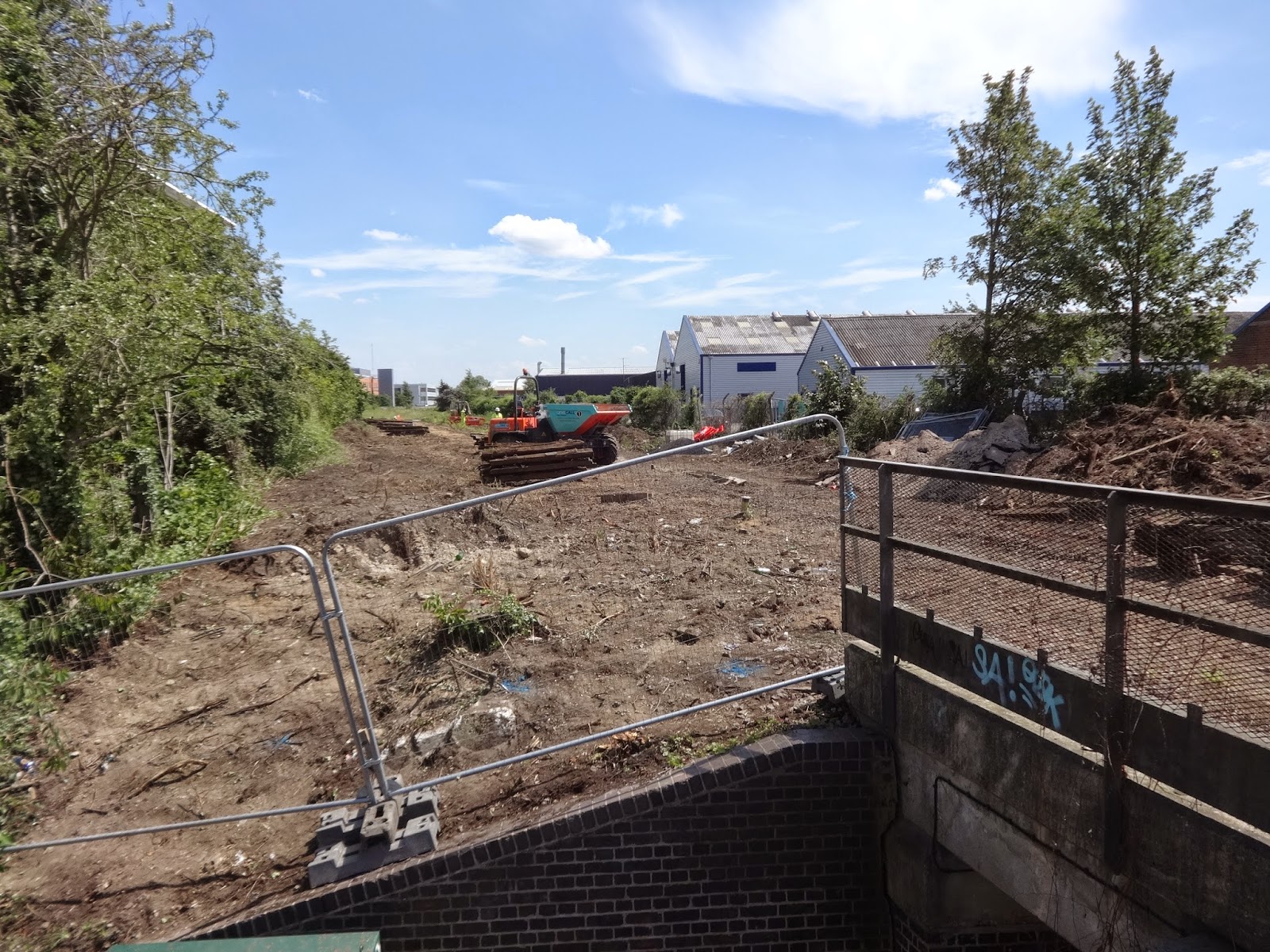 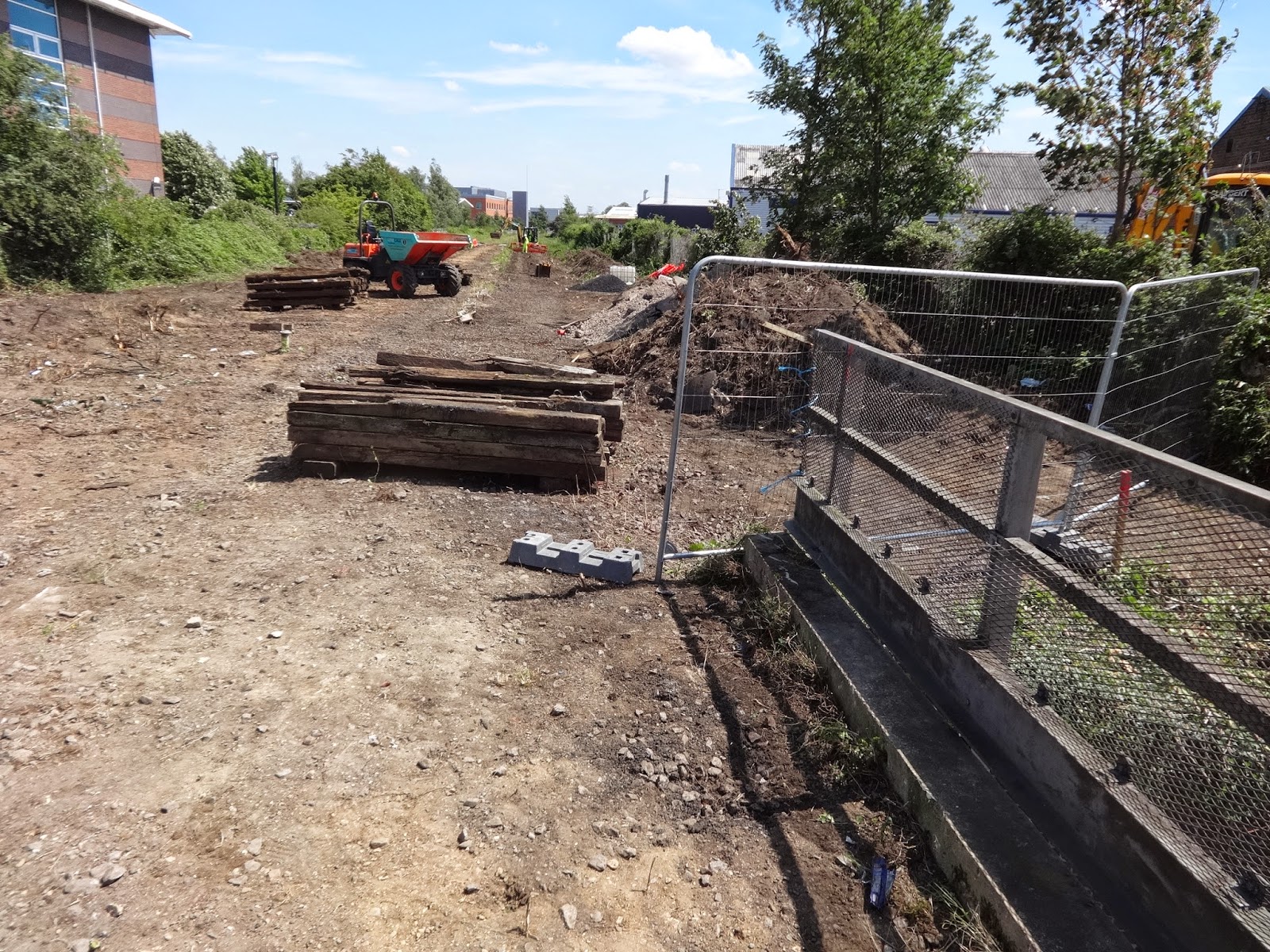 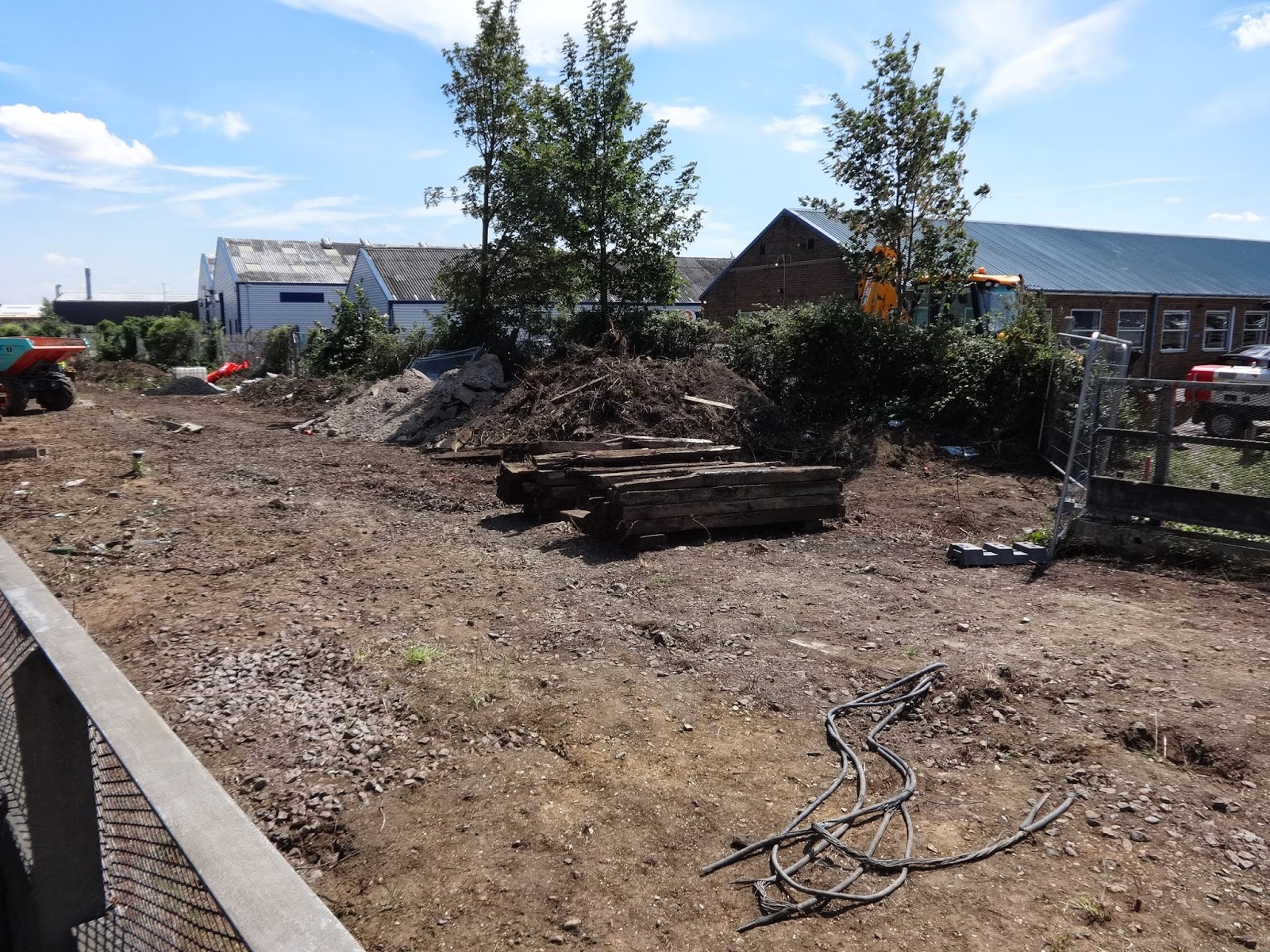 They're also working on the opposite side of the road, where the busway emerges onto Milton Road. The buses have to make a rather sharp right hand turn out of the busway when heading towards Cambridge. A slice has been taken off the traffic island to ease the turn. 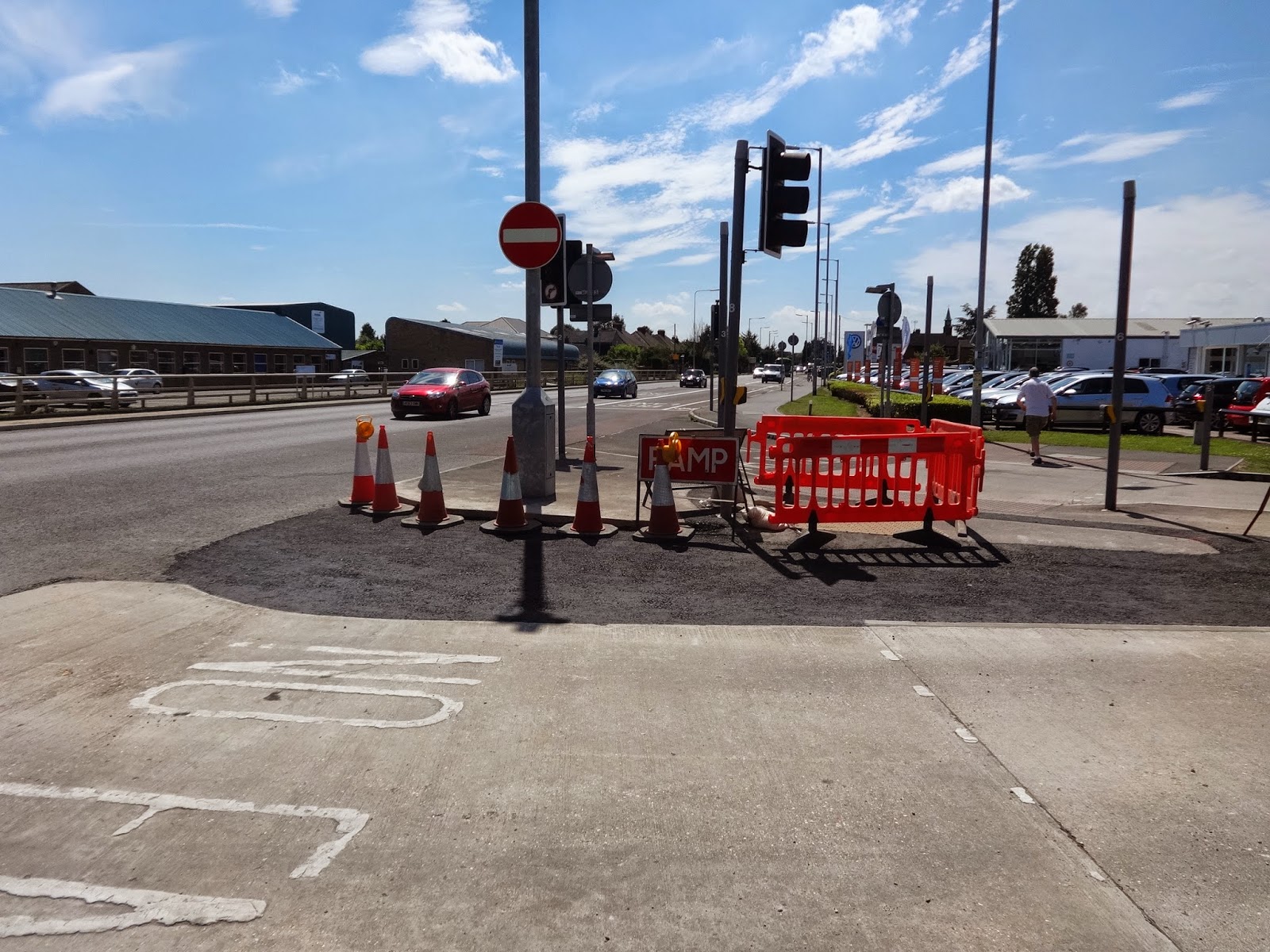 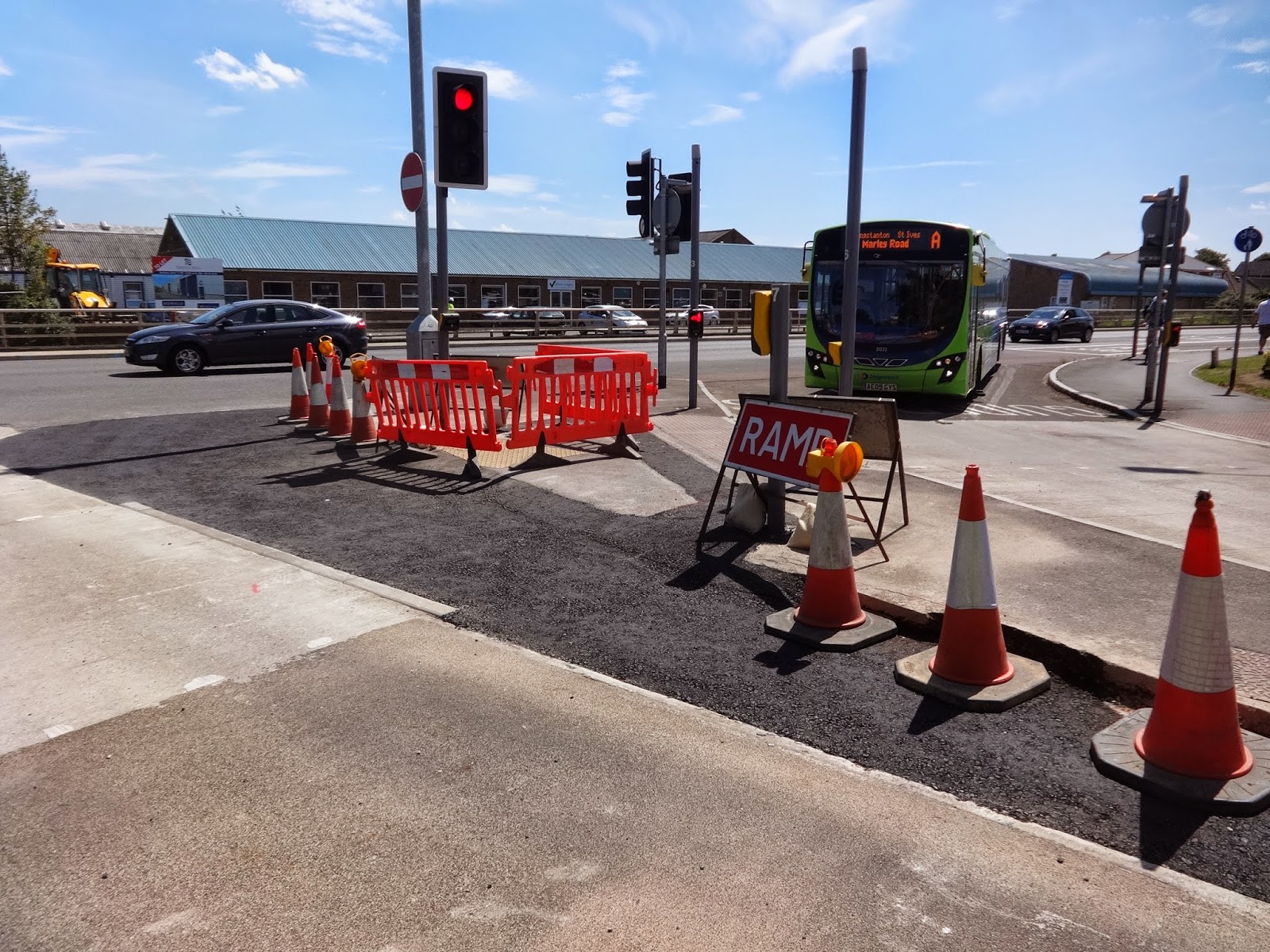 Posted by Andrew Bethune at 18:28 No comments: