This week's Hunts Post has a short report about the accident  on 20 November in which a bus was derailed and the track damaged. See Hunts Post ( 28 November, page 15). Stagecoach are conducting an investigation. There are comments from one of the  passengers in the damaged bus. Passengers had to walk to the longstanton bus stop to board another bus which was then diverted via Ramper Road.
Posted by Andrew Bethune at 22:36 2 comments:

Stagecoach Cambridge have announced their special timetable for the Christmas and New Year period. Click here.

Posted by Andrew Bethune at 14:25 No comments: 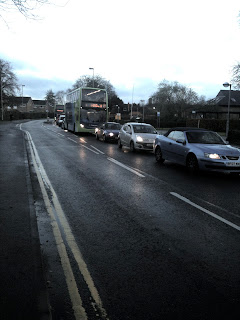 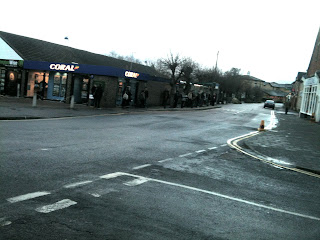 There has been a proposal to build 12,750 new house on the site of a former barracks at Waterbeach. In order to cope with the extra travel needs of this housing development  a new stretch of guided busway has been suggested linking Waterbeach with the existing busway. See article on Cambridge News website here .

Posted by Andrew Bethune at 09:10 No comments:

The Parkside bus stop in Cambridge, served by route A west bound is closed until 30 November due to road works.
Posted by Andrew Bethune at 08:58 1 comment:

The water level in the River Great Ouse has risen since yeaterday.

The previously flooded section of the cycle track is now even deeper under water - the small concrete bridge over the floodwater channel  (immediately east of the Ouse Viaduct) is totally submerged and the nearby brick art installation is under water.

There is now a long flooded section  east of Fen Drayton Lakes, so, as at 26 November, the cycle track is effectively out of commission from St Ives to Swavesey.
Posted by Andrew Bethune at 08:33 21 comments:

Following  my earlier posting about the recent accident (a bus failed to enter the guideway correctly and became derailed), I have taken the opportunity of a dry Saturday morning to cycle to the site and take a few photos (from the safety of the cycle track, I hasten to add). Stephen Lawrence and Kevin have both added comments to this blog describing the damage to the busway track.

In this photo you can see where the edges of the guide track have been damaged  and patched with new concrete. 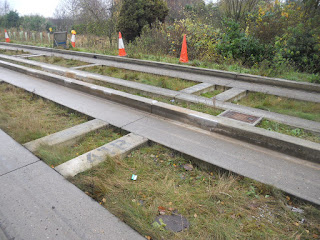 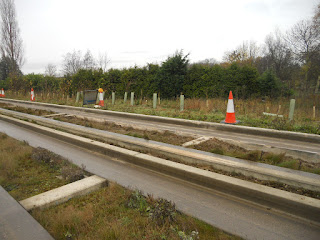 Here one of the cross beams has been swivelled out of position by the accident. 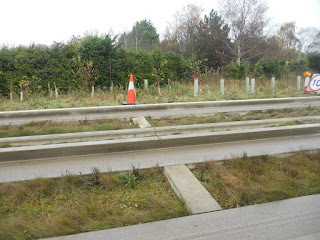 The damage extends along five or six of the concrete track sections. A 10mph speed limit continues in place through the accident site. 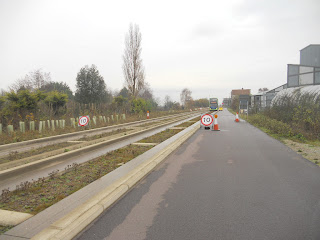 Posted by Andrew Bethune at 12:18 No comments:

Today (23 November) the cycle track is flooded for about  200 metres  east of the Ouse Viaduct.

The heavy rainfall of the last few days in the Great Ouse's Northamptonshire and Buckinghamshire headwaters is likely to reach St Ives over the weekend, so I'd expect the water level to rise even further.

The busway cycle track seems to me to be susceptible not so much to the amount of local rainfall, but to water coming down the river from its huge catchment area after periods of heavy rain. I think the river authority tries to control the flow of water by using the section between St Ives Lock and Brownshill Lock (Earith) to hold water back, probably in order to minimise closure of the main road at Earith Bridge.  I think we need to campaign for having the cyle track through the floodplain raised by another meter or more.
Posted by Andrew Bethune at 08:36 2 comments:

A guided bus was 'derailed' today on the busway just west of Longstanton. See Cambridge News for a very brief report. Buses were hugely delayed. There were no injuries.

A fuller version of this report is in the print edition of the Cambridge News ( 21 November, page 3). This refers to the possibility that the driver may have been taken ill.

A BBC report adds some information. The driver apparently misjudged the entrance to the busway and had to be taken to hospital. The bus was left at a 45 degree angle.

I caught the 1644 A from New Square - it was already about 15 minutes late leaving Cambridge. Buses were diverted off the busway at Longstanton, via Ramper Road and through Swavesey village to rejoin the route just west of Swavesey Busway Stop. This added a further 10 minutes delay to the journey.

Another passenger waiting at New Square told me he had been waiting  over an hour for a bus to RAF Wyton.

The Busway stop at Parkside, Cambridge, is closed from Monday 19 to Thursday 22 November 2012.
Passengers for busway service A are being advised to use New Square or Drummer Street as an alternative.
See Stagecoach service updates. This is due to road works. No temporary stop is provided near Parkside. This evening I travelled home on the 1744 A from Cambridge Railway station, and this bus was diverted via Regent Street and Park Terrace.
Posted by Andrew Bethune at 21:59 No comments:

Histon guided busway stop was the venue for the creation of a series of images by Simon Haydn and Laura Aldred . The images, inspired by the 2010 science fiction film Tron:Legacy, are intended to encourage cyclists to use lights. See Cambridge News for full story and a slideshow.
Posted by Andrew Bethune at 09:30 No comments:

The cycle track that runs alongside the busway was flooded this morning -  from the Ouse Viaduct eastward for about 300 metres to just beyond the concrete bridge over the flood water conduit. For mist of that stretch, the track was only partly covered with water, but near the small bridge there was water right acreoss the track. This seems to be the lowest point on the cycle track and is the first section to flood when the river level rises.

The track was passable - but if the water level riseslater  today, there could be problems for cyclists.
Posted by Andrew Bethune at 08:45 4 comments:

Delays on busway due to accident on A14

A fatal accident in which  two trucks collided on the A14 between junctions 32 and 33, had a knock on effect from busway passengers this evening. Traffic ground to a halt on Milton Road and buses leaving Cambridge on routes A and C were delayed. I was on the 16.53 from New Square, which did not reach the Science Park until 18.40. Arrival into St Ives was at 19.00, 1 hour 35 minutes late. See report in Cambridge News.

Although the busway has effectively bypassed the Fenstanton-Girton section of the A14, Milton Road is still susceptible to delays when there are problems on the A14. There are few options for buses diverting from their normal route to avoid Milton Road ( e.g. Gilbert Road and Arbury Road) but on this occasion my bus was past Arbury Road before the traffic came to a standstill.  I was not aware of any radio communication between the bus driver and the busway control centre at Longstanton.

The lorry driver killed in the accident has  been named as Richard Plumb (52) from Bury St Edmunds. See Cambridge News.
Posted by Andrew Bethune at 20:42 No comments:

Recently there was an incident which could have happened on any bus, but I mention it on this blog because it happened at St Ives Park & Ride on a guided bus.

As a man and woman were climbing the stair to the upper deck, the bus moved off from the stop. The man slipped on the stairs and fell against the woman, who broke her leg as a result. The incident is being investigated by Stagecoast East and they are looking at CCTV footage to see if anything could be done to prevent a recurrence. See Huntingdon & St Ives News & Crier (1 November , page 15).

Bus passengers are vulnerable on other ways. For example, local buses are not required to have seat belts. If a bus is full and people are standing, you can be flung around if the bus stops suddenly or changes direction. It used to be recommended by some bus companies that, when alighting, you don't leave your seat until the bus has stopped - this practice, of course, if taken to its extreme would extend stop times, and slow down overall journey times.
Posted by Andrew Bethune at 20:47 No comments: