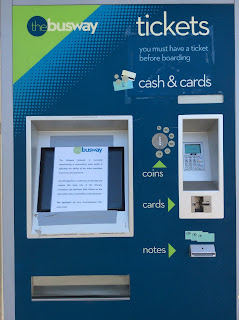 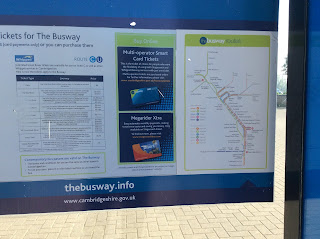 These photos show two examples of how the guided busway is being neglected.

The ticket machines have been out of action now for several weeks, with no sign of them being repaired. These machines were intended to speed up passenger loading by ensuring the people had tickets before boarding, though they never installed ticket machines at some of the busiest stops such as Drummer Street and St Ives Station Road. Then the machines ceased to accept coins. And now they have conked out completely

The second photo shows an information sheet which out of date, still on display at St Ives Park & Ride. It looks as if the organisation responsible (Cambridgeshire County Council?) has taken its eye off the ball, and maybe the Council is too strapped for cash.
So much for this supposedly 21st century transport system!

Another of my gripes is about the poor bus service to Cambridge North Station. The information displayed at bus stops doesn’t tell you which buses go to Cambridge North. So if you aren’t very clued up about the bus timetable, how are you supposed to know. I think Stagecoach should divert the A service via Cam North. That way St Ives would have a 15 minute interval link to the Station for most of the day.

Fares are too high. Yesterday with sone family members I travelled from the new bus stop at Houghton back to St Ives. The young adults in the party had to pay £4 for a single ticket - that’s for a journey of less than 3 miles. It compares ver unfavourably with Lothian Buses, which operates in and around Edinburgh. £4 will buy you a day ticket which covers the whole of the city, plus Midlothian and parts of East Lothian. But then Lothian Buses is owned by the 4 local authorities who run it as an ‘arms length’ venture. Despite, or perhaps because of the value for money fare structure, it returns a modest profit, not to shareholders, but to the public as represented by the local councils of Edinburgh,  East, West and Mid Lothian.