On Bank Holiday Mondays, the centre of St Ives is taken over by an enormous market which draws traders and customers from far and wide. Yesterday (29 August) was no exception.

Even St Ives Bus Station is given over to market stalls. Previously this did not matter as the only bus service running was a shuttle between Huntingdon and St Ives, terminating at The Quadrant. But this time, with both Stagecoach and Whippet advertising an 'Sunday' service on the busway, I wondered whether the market would have vacated the bus station in favour of the buses. But not so. Stalls filled the bus station. 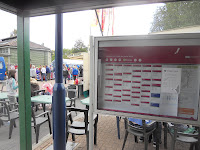 At first glance I could find no information explaining where the buses were running to and from, but there were a couple of small printed notice attached inside the display cases, mentioning in very small print that passengers should go top The Quadrant. One of these notices was so curled up that it was impossible to read most of the times shown. 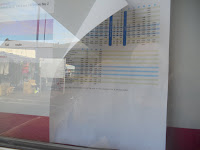 I suppose it is good sign that the bus companies are having to run extra buses, but the small notice advertising the new Sunday bus times had a glaring mistake on it - showing bus from St Ives to Cambridge taking 70 minutes. I think a typing error. But good to know the buses will be running every half hour on a Sunday. 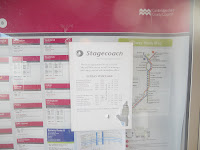 In The Quadrant were two signs telling motorist not to park there on the Bank Holiday Monday - but nobody had paid any attention to it. There was a slight gap in the parked cars at the bus stop itself, but not enough for a bus to enter. So, the buses were having to stop in the main traffic lane. 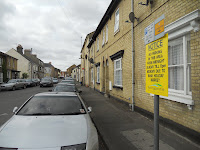 I took one picture showing congestion at the back of Budgen's with a coach off-loading market visitors while a service bus was held up behind it. 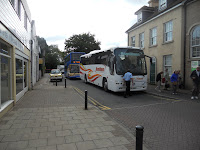 Buses bound for Huntingdon on service B were arriving in via the Park&Ride car park and Meadow Lane, then looping right round Cromwell Place and The Quadrant.