55,895 passenger used the guided busway in the first week, and extra buses have had to be put on to cope with the demand. (The Hunts Post, 17 August 2011, page 3) But how will they cope when everyone returns from their holidays and the A14 and Cambridge streets get busy again?

The letters from users of the service are more revealing and do not share the optimism of the Directors of Stagecoach and Whippet. ( The Hunts Post, 17 August 2011, page 7)

Here are some of the points raised:

1 - late running, unreliable buses, particularly on Route B
2 - journey times of up to 2 hours between Addenbrooke's and Huntingdon
3 - two service B buses turning up together
4 - huge queues trying to board at Drummer Street
5 - the indirect route between Huntingdon and St Ives - via the Oxmoor and Hill Rise

One worrying statement is this "The conclusion I have come to is that, once it has settled down, the guided bus will be slightly slower than the traditional bus". Well, yes. Just compare the old timetable with the new one. The fast run on the guideway doesn't quite make up for the often slow plod through the Cambridge streets. Perhaps the only time we shall see the benefit is when the A14 is blocked, or is so busy that traffic there is crawling. But if traffic is crawling in Milton road, Histon Road or Bridge Street, the busway isn't going to help.

What about this from a resident of Brampton "Come on, bus companies, try to be more competitive and make the bus more attractive than the car"?

I don't think bus companies can be relied on to provide a good enough network of service to attract people out of their cars. There are huge holes gaps in their network of routes. The town centre of Huntingdon is only about 17 miles from central Cambridge and yet the bus takes (in theory) an hour or more. However, we know that not many people live in the town centre - so how to the buses serve the suburbs adequately? Godmanchester is 15 miles from Cambridge and has no direct service at all. One of my colleagues, who travels in from Godmanchester drives to Madingley Park & Ride, it's her best option. I don't see how Godmanchester can be plugged into the guided busway easily without running along part of the A14, but perhaps a Huntingdon - Godmanchester - Papworth - Cambridge route via the A428 might be viable. It could start from Huntingdon Tesco's or Hinchingbrooke alternately. And perhaps the Brampton service could feed into it at Huntingdon Bus Station.

A St Ives resident who works in Cambridge notes that, because the busway has opened up more stops, it take longer for him to get home - but he will continue using the service because 'nothing is worth parking in Cambridge'.

Someone from Warboys expresses 'high hopes' for the service. She seems to have previously used one of the Park & Ride sites, and has switched to St Ives P&R. But her comment raises another issue in my mind that hasn't been properly address - how to provide frequent, all day connections to the busway from outlying communities such as Brampton, Ramsey and Warboys. A few token through buses to Cambridge are provided for Needingworth, Bluntisham, Earith, Colne and Somersham via the busway - but are they enough to build confidence in the service? As I mentioned in an earlier posting Fenstanton now seems to have a half hourly link to St Ives Park and Ride - but will anyone use it when most of the day there is a direct Whippet service to Cambridge via Bar Hill? No attempt has been made to link the existing Citi 5 service through Fenstanton, Fen Drayton, the centre of Swavesey, Over and Willingham into the services on the busway, either at Swavesey 'station' or at Lonstanton Park & Ride. 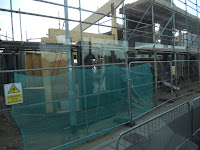 [This is Longstanton Park & Ride - still under construction]

The road layout at St Ives Park and Ride doesn't make it easy for non-busway buses to connect there. Extending the service A to/from St Ives Bus station would help.

A final comment in Gail Anderson's article, reiterates the problem of delays, most notably an evening bus service departing 30 minutes late from Cambridge.

The Hunts Post can be viewed online at http://www.huntspost.co.uk/home . You have to register, but access is free.